join the jubilant celebration of Nepal...in a Nepali way

Nepal is a country of festivals, every day in one corner or the other there is always a celebration going on. This multiple vibrant of festivals is the outcome of different ethnic groups of people living together.

Nepal being a colorful country is the outcome of almost 125 different ethnic groups and 123 different languages but all living together in a peaceful environment, making a local festival a national festival. This is so because every ethnic group has its own festivals and celebration which now takes a national form, celebrated nationwide.

Below are some very popular festivals in Nepal, which are not to miss for any travelers when they are at the right time while visiting Nepal. Please note that Nepal follows the Lunar calendar also known as Bikram Sambat (BS) over the Georgian calendar, now Nepal is in 207 BS, so the date for every festival varies year by year. For any information about the forthcoming festival in Nepal please contact Discover Altitude.

Discover Altitude here tries to focus on some of the popular 10 national festivals in Nepal which are celebrated nationwide. 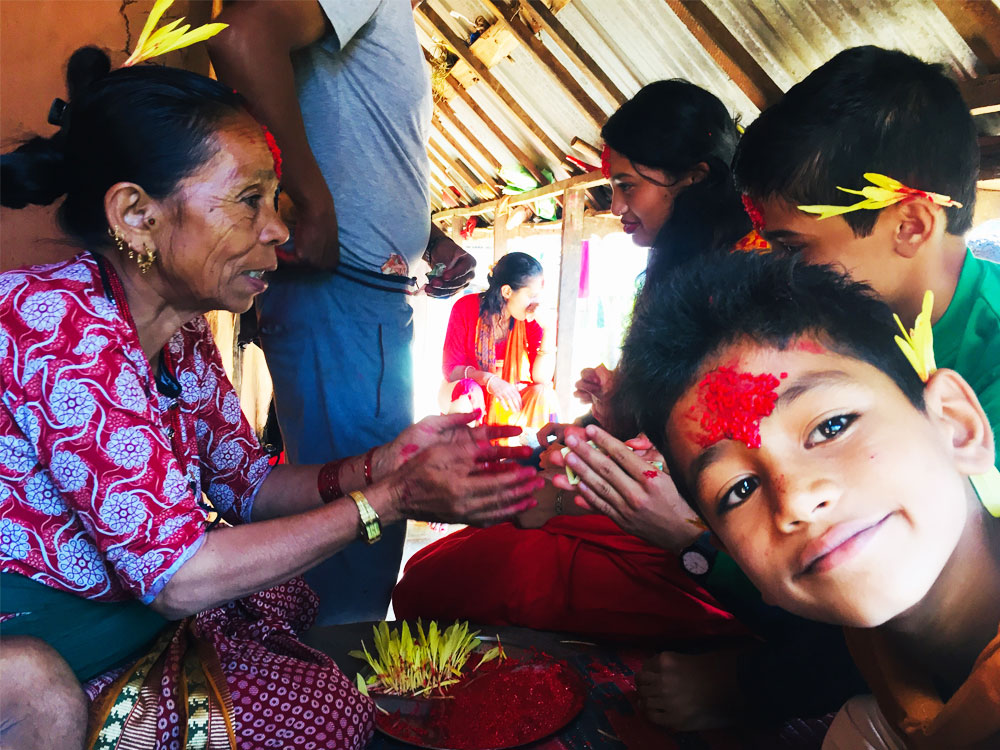 When comes to talking about the festivals of Nepal Dashain is the first which comes to the mind of every Nepali. Dashain is one of the most popular festivals in Nepal, which is celebrated nationwide for 5-days but the official festival starts 5 days prior, making it a 10-days festival.

Although the Dashain Festival is celebrated for 10-days, the main highlights of the Dashain festival start from the 6th day. This festival is mainly observed by the goddesses Durga, so it is also known by the name Durga Pooja Festival, which is popular in India and other Hindu dwellers areas.

Durga Pooja or Dashain Festival has its own history and ancient tales but the main outcome of the celebration is victory over evil, truth over falsity, and Gods over demons. To celebrate the festival goddesses Durga is worshiped in every temple and house, as she is regarded brave, powerful, and ever-loving goddess. 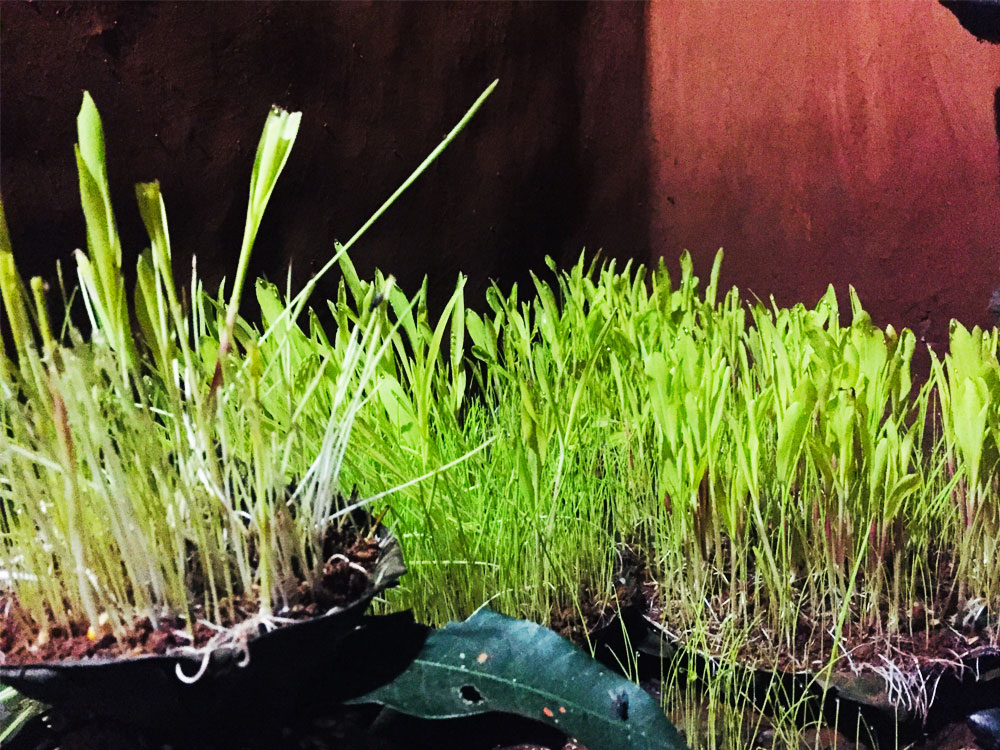 In the context of Nepal, people sacrifice animals in the temples and houses, and the blood is splashed on the idol of goddesses to pacify their trust (there is a mythical story related to animal sacrifice).

On the final day of the Dashain festival, people take blessings from parents, relatives, and elders with tika on their forehead, tika is mainly made up of rice, curd, and red powder, which symbolized power, and bravery, protection, and devotion.

All family members gather together from the 6th day until the 9th day and then they travel to their relatives and in-laws' house to take blessing which further continues for a couple of days. 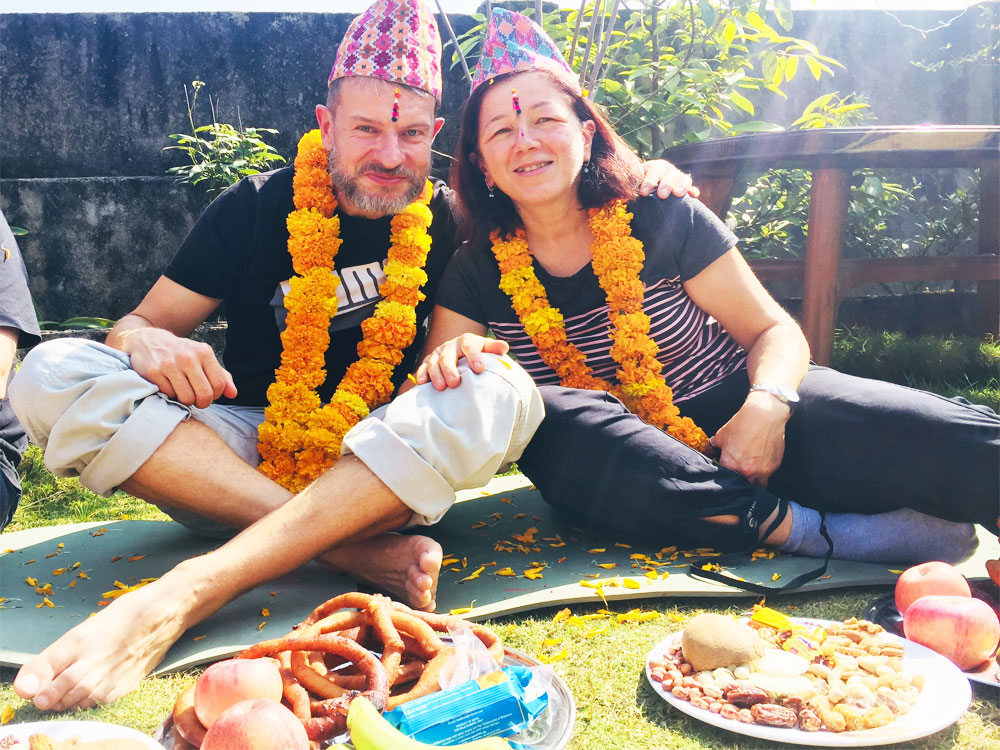 Tihar Festival is also known by the name Deepawali Festival. Tihar is the second largest and most popular festival in Nepal after Dashain. The festival of Tihar lasts for 5-days, starting with the dog festival, crow festival, cow and ox festival, and ending with the brothers and sister festival, making it a 5-days Tihar celebration.

Tihar is also known as a festival of lights, every individual house is beautifully decorated with lights and lamps which last for the same 5-day, ending with the final day for brothers and sisters to put tika. This also makes the brothers and sisters festival, on the final day sisters, put tika over brother’s forehead and vice versa and bless each other with long and healthy life and prosperity, whereas in return brothers do the same promising to help a sister in the time of need and to continues the bond of love and also promise them to come every year in the Tihar Festival to take blessing no matter where they are.

Holi is another important festival in Nepal, it is known as the festival of colors. Holi is celebrated nationwide for a single day, but in the context of Nepal, Holi is celebrated separately in the Hilly and Terai areas on alternate days. People gather everywhere, visit relatives, and friends, and splash different colors on each other, making it an outdoor festival.

This Holi festival is also celebrated to exchange love, so it is believed even the worst enemy becomes friends from the day of the Holi festival. 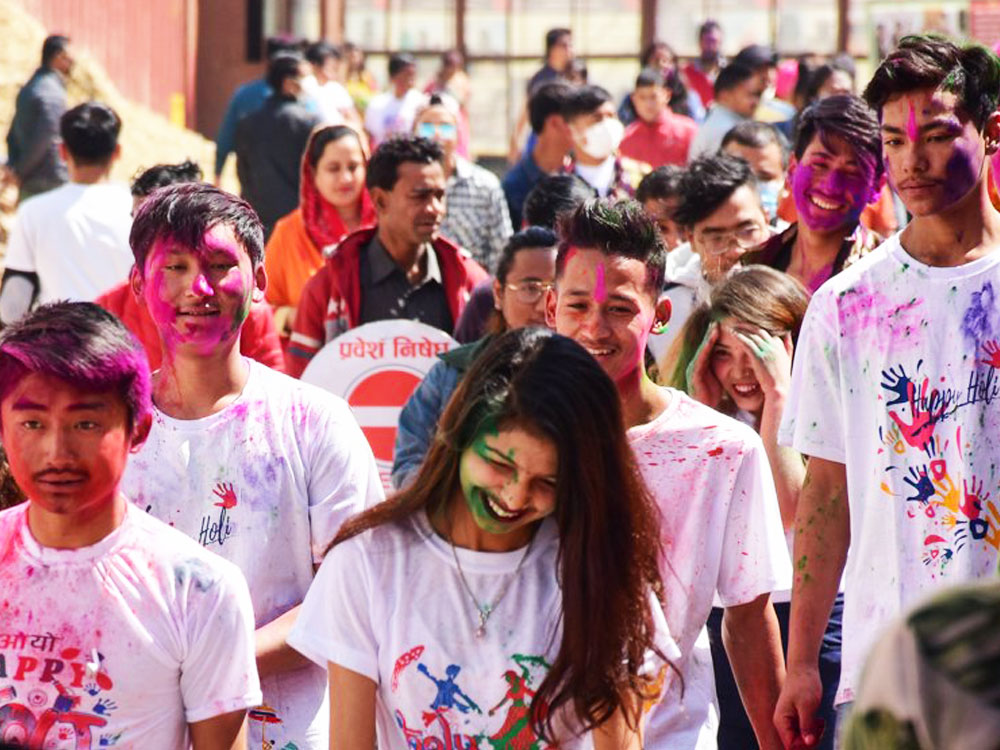 Apart from this, the Holi festival is celebrated for the victory of good over evil, this is related to an ancient story from the Vishnu Purana, a holy Hindu text.

7th March Holi festival in the Terai region of Nepal 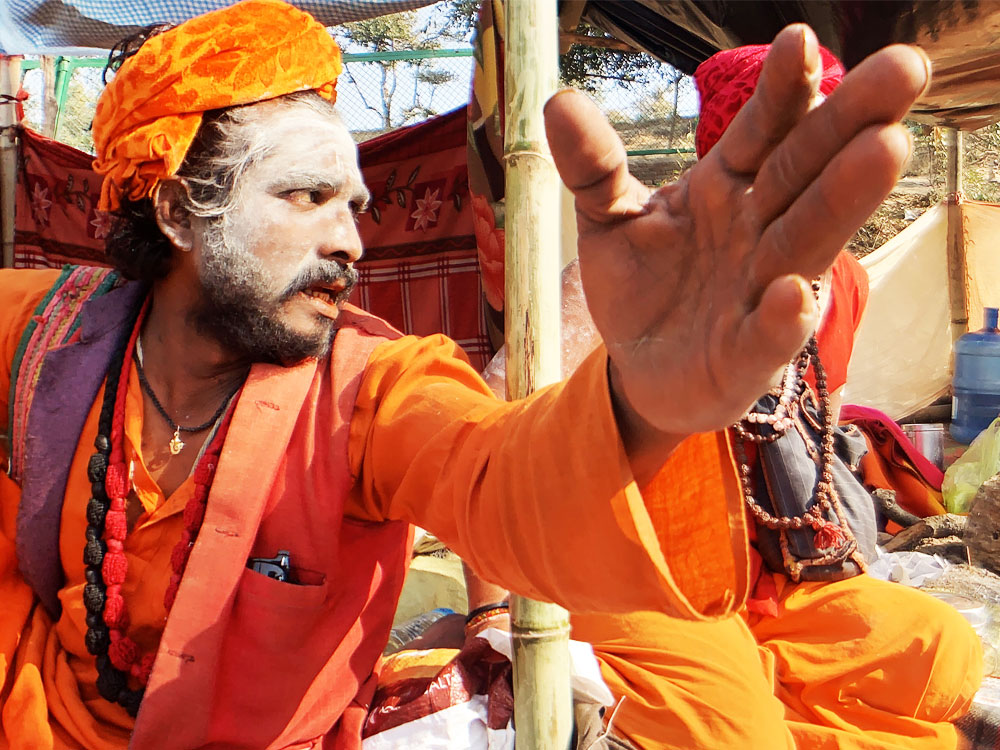 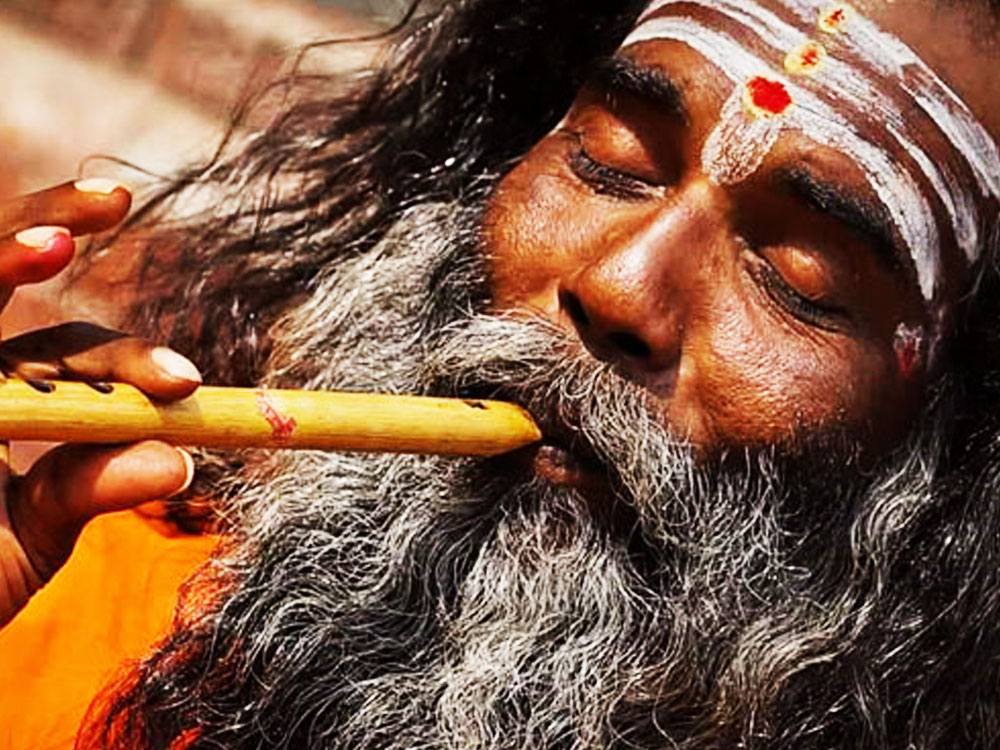 During Shivaratri, devotees gather around Shivalaya (Temple of Lord Shiva) the whole night and day they sing and dance and consume marijuana as well. Different varieties of foodstuff are made from marijuana and are offered to devotees.

Pashupatinath Temple in Kathmandu which is also the center of all Shivalaya around the world gets busy with thousands of pilgrimages. 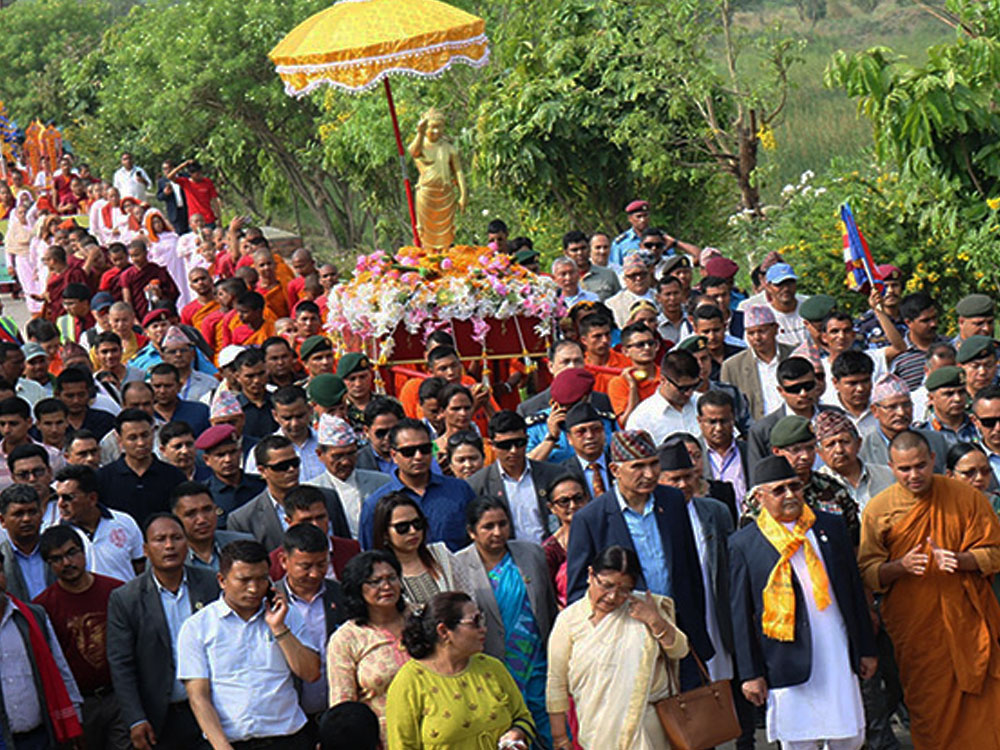 Buddha Jayanti or Buddha Purnima is one of the popular celebrations around the globe, marked as the day when Lord Buddha, the founder of Buddhism and the ‘messenger of peace’ was born and the same day when Buddha attained enlightenment, and also the same day when he attains Nirvana (death). This marks Buddha Jayanti an important day for Buddhist followers.

Buddha Jayanti is a national celebration day in Nepal, although the majority follow Hinduism as their main religion, Buddha is also regarded as one of the 8th incarnations of Lord Vishnu. 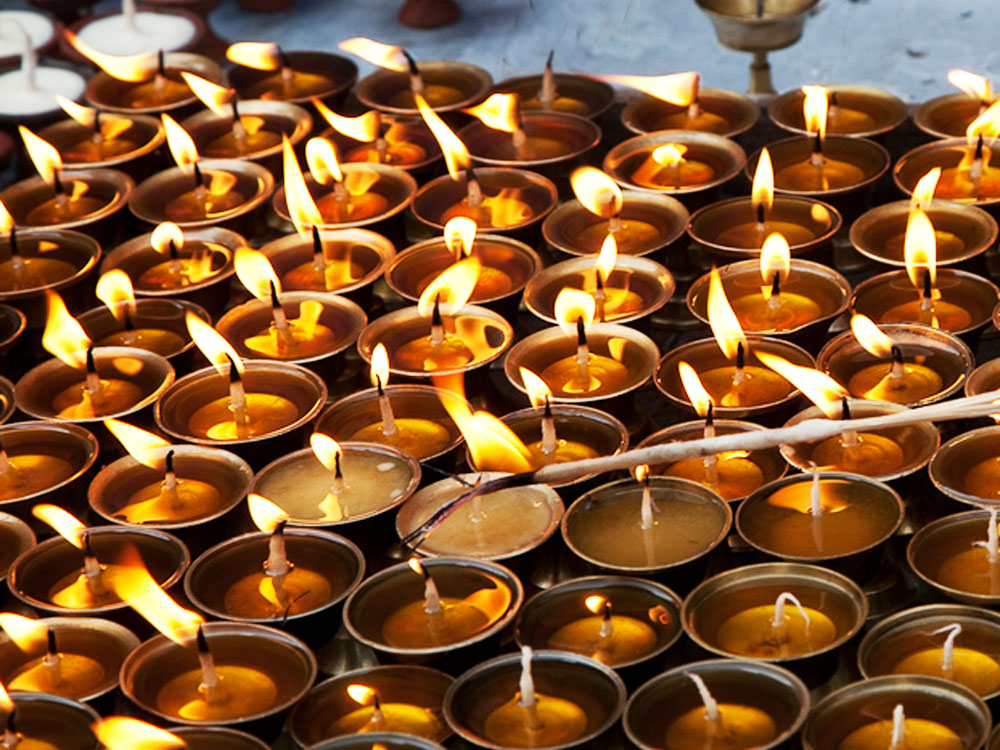 People visit monasteries, gumba, and Buddhist shrines to offer their regard and thankful to Lord Buddha, for the principle he propounded. Historical sites in Nepal like Lumbini (the birthplace of Lord Buddha), Swyambhunath, Bouddhanath, Patan areas, etc. remain busy with devotees.

Apart from these devotees also visit monasteries and shrines and offer gifts to monks and needy people. 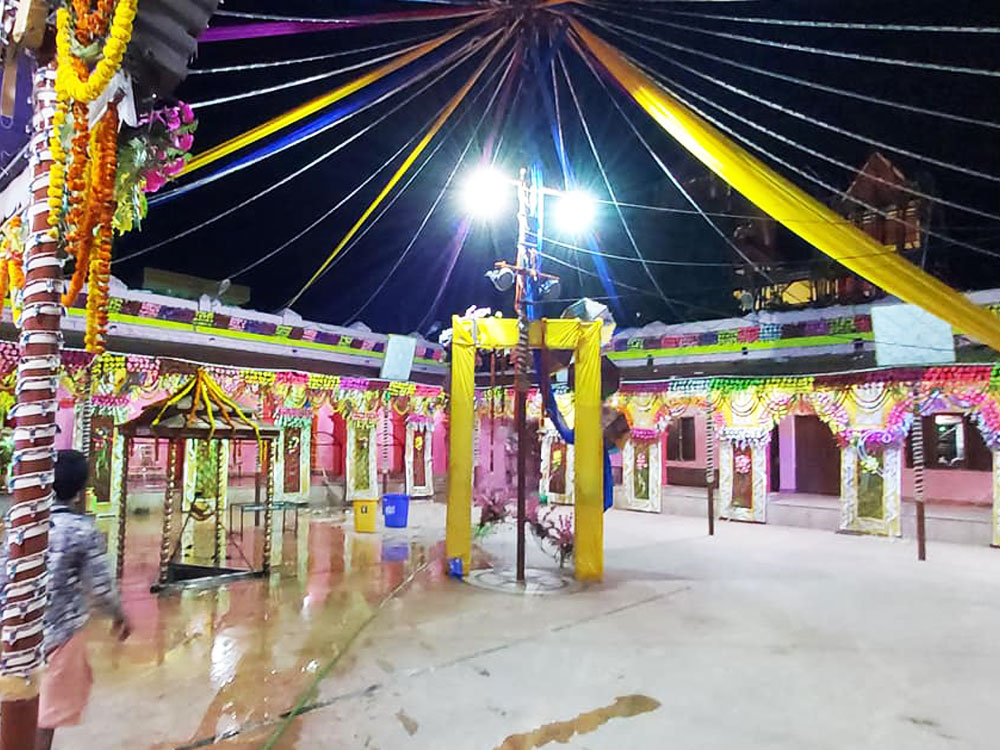 Ram Navami is another a-day celebration Hindu festival, mainly celebrated in Nepal, India, and other areas among Hindu communities. Ram Navami is marked as a day when Lord Ram the 7th incarnation of Lord Vishnu was born to a royal family of the Solar Dynasty to King Dasharatha and Queen Kaushalya in Ayodhya presently in India. 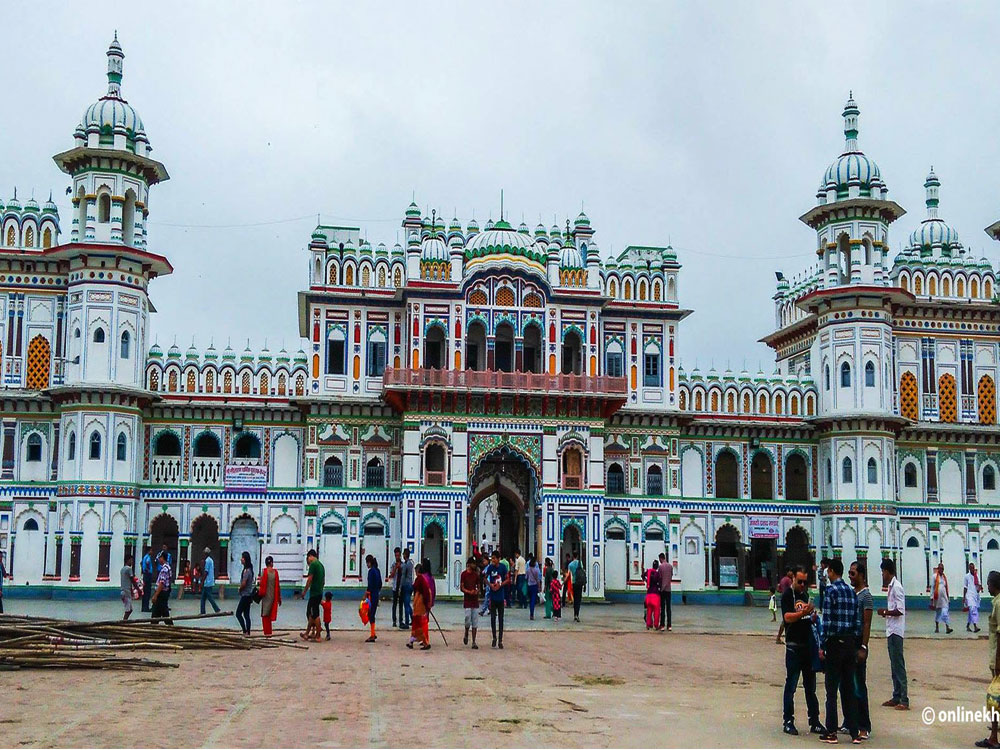 The celebration of Ram Navami is done with great joy and respect towards Lord Ram for his dutifulness and devotion towards his parents, citizens, brothers, and wife Sita, which makes him known as ‘Maryada Purushottam’, a symbol of ‘Perfect Man’.

Devotees on this day visit temple of Lord Ram and take his blessing and also, and they clean their houses and idol of Lord Ram, Sita, and Laxman and decorate them with beautiful colors and flowers. 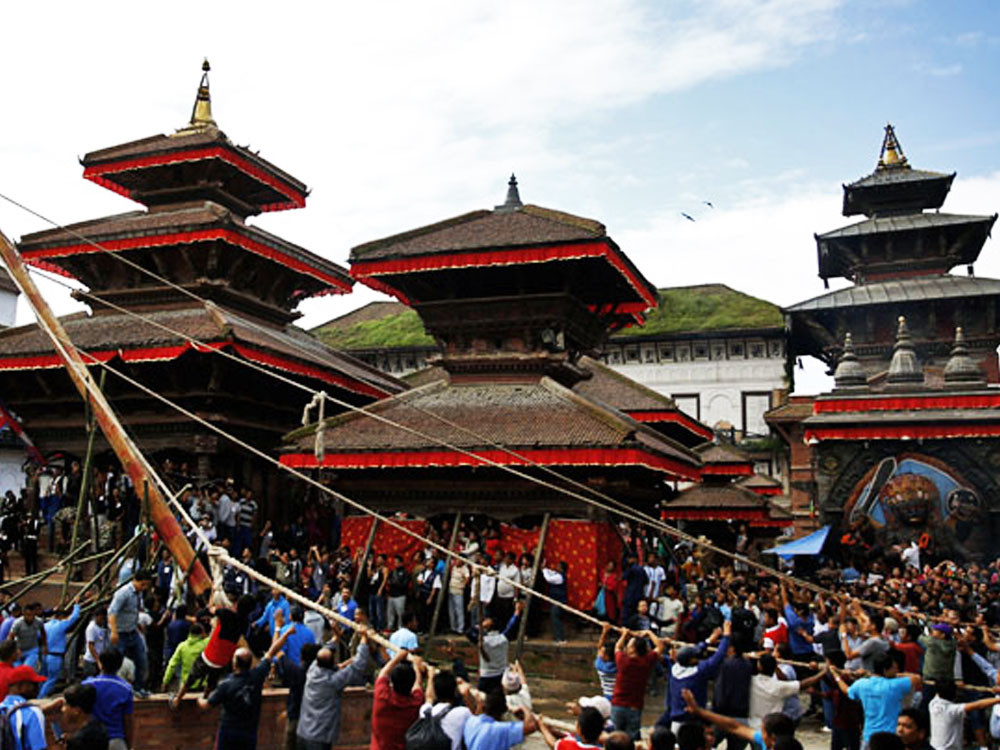 Indra Jatra is a popular festival of Kathmandu Valley, mainly observed among the Newari Community but now became a nationwide festival making its center as Kathmandu valley.

Indra Jatra is an 8-days long festival, which starts after erecting a wooden pole from a pine tree in the heart of Kathmandu city also known as Basantapur or Kathmandu Durbar Square but the first day is celebrated in full spirit.

During the ceremony, hundreds of devotees and locals gather around the Basantapur area along with high government officials including the head of the state. The chariot of living goddesses KUMARI is being carried out in a procession in the main street, and devotees flock out to take her blessing, and this is the time when people are able to have a close view of the Kumari and take her pictures. 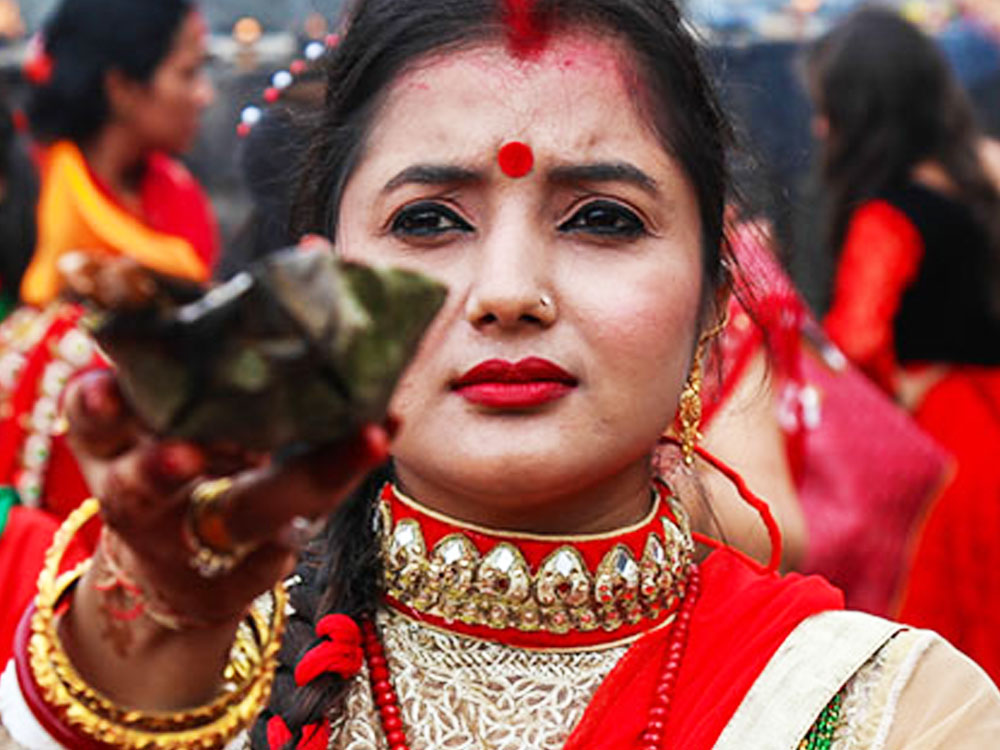 Teej Festival is one of the most popular festivals in Nepal for women, it is also known as a women’s festival.

Teej is a three days festival, which continues with singing and dancing, and married women visit their parent's house, meet their childhood friends, and share their emotions, sorrow, and happiness through songs. 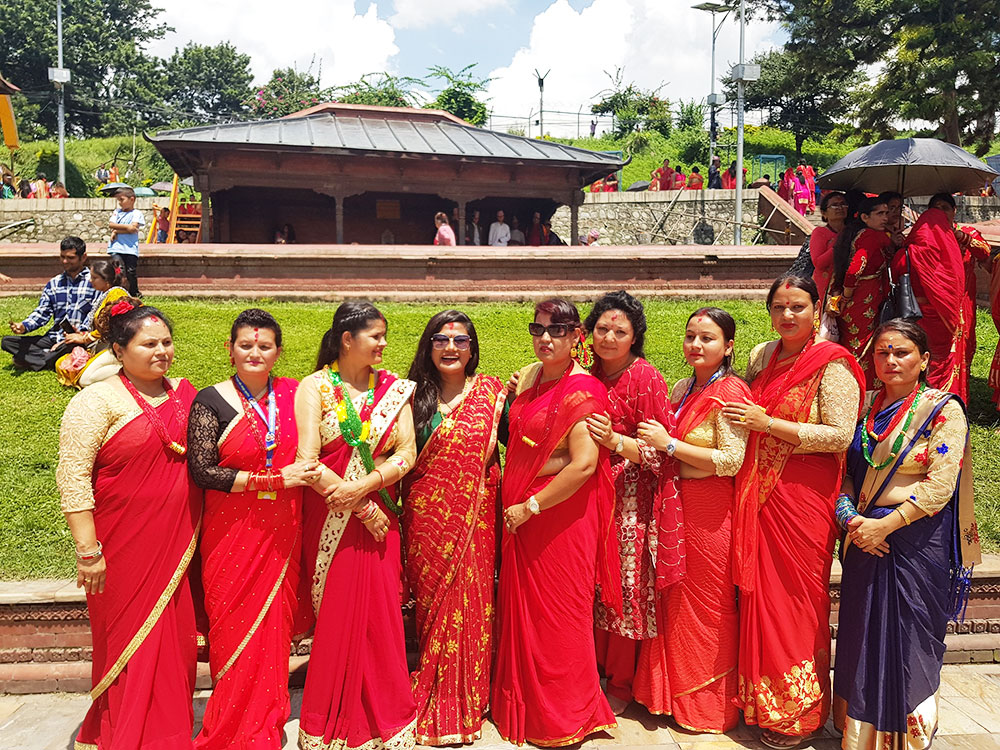 Apart from this, they take fasting on the third day and visit Lord Shiva’s temple and perform the ritual ceremony for the blissful marital life, long-lived of their husband, children, and family members and for unmarried women, Teej is observed as a festival to take blessing from lord Shiva for their blissful forthcoming married life and wonderful family relation. Married women wear red saree, whereas unmarried girls attire themselves in different costumes. 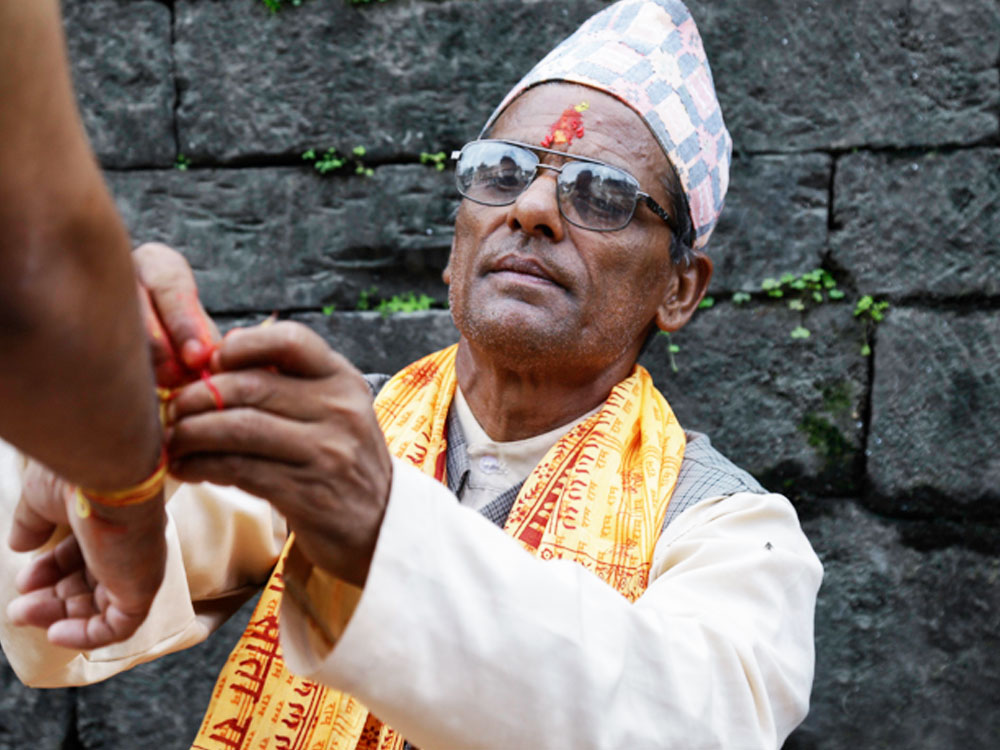 Janai Purnima is another one-day festival in Nepal, also known as Rakshya Bandhan or Rakhi festival. On this special occasion, people visit temples early in the morning and thread it around their wrists a holy thread and also brother visit their sisters and put colorful Rakhi in their hands.

Sisters bless their brothers with good luck, prosperity, and long life, and brothers vow to protect their sister in every need and they exchange gifts. 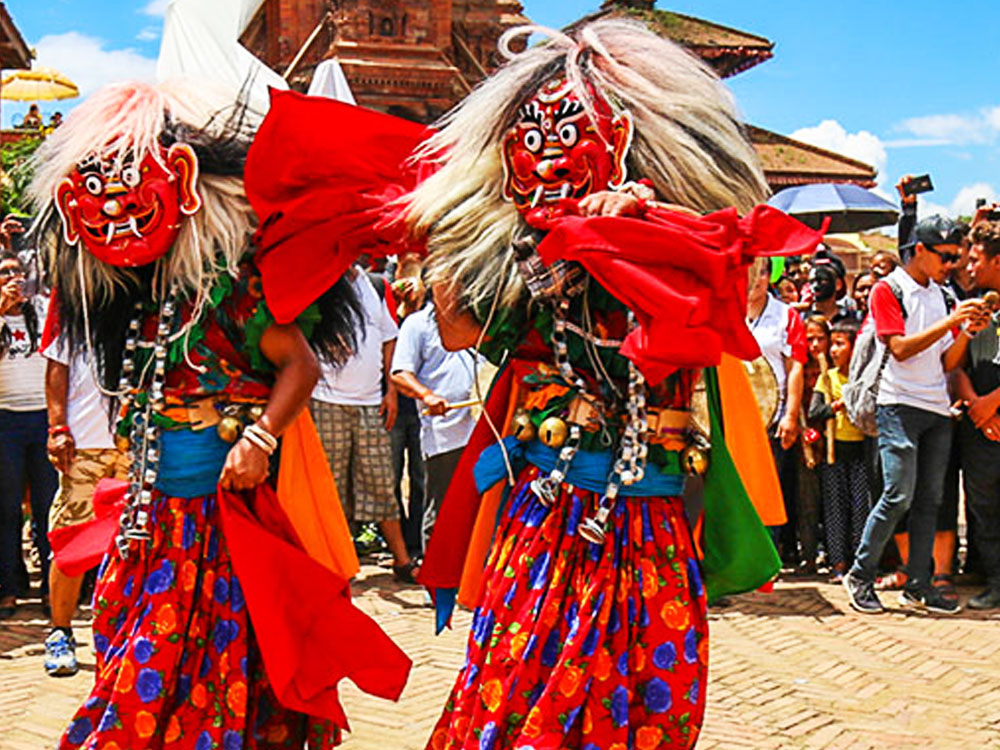 Gai Jatra is another popular festival in Kathmandu valley mainly among the Newari community but now its popularity has reached far away to other communities as well. King Pratap Malla around the 17th century AD, started the Gai Jatra festival for his Queen to come out of the mournful condition when their son died.

This Gai Jatra festival is now celebrated in the memory of their beloved one, people from each and every house come into the street in disguise form to show their love and respect towards the departed soul.