...takes you to one of the most deserved land to explore the hidden lake on earth

5based on 3 reviews
Price per personUS$1099
Customize Trip

Gokyo Lakes and Gokyo Ri Trek is one of the most incredible classical treks in the Khumbu Region of Nepal. Filled with an abundance of different vegetation, flora, and fauna, the trail is a diversification of nature and culture. It is a moderate trek for those trekkers who wish to try something new and challenging in the Himalayas.

The trail will lead us to an abundance of scenic views of the mighty Himalayas along with Mt. Everest the highest mountain on the earth. Gokyo Lakes trek will lead us to six main freshwater lakes of the area located from an elevation of 4700m-5000m, all comes under Sagarmatha National Park comprising an area of 443 sq. mile.

Along with the conserved area, the Gokyo Lake and the surrounding lakes occupy an area of 30 sq. miles and have been designated as Ramsar Site which has hydrological importance.

These lakes are the main sources of water flowing into the Dudh Koshi River and another stream of the Himalayas, water in the lake is all filled by the snow melted from the surrounding mountains.

Apart from these, Gokyo and the surrounding lakes have religious significance for both Hindu and Buddhist followers, regarded as the abode of Nag Raj (serpent god), which makes strong faint not to harm any animals of the surrounding region, during the month of August there is a festival known as Janai Purnima, a flock of devotee trek into the lake for a holy dip for purification of the inner soul.

As the trail is less crowded as compared to other trekking areas trekkers can enjoy their time in a solitary way.

The main attraction of the trek will be the Gokyo Lake also known as Dudh Pokahari covering an area of 42.9 ha, followed by Thonak Lake (62 ha) one of the largest lakes, Gyazumpa Lake (29 ha), Tanjung Lake (17 ha), Ngojumba Lake (14 ha) and Longbanga Lake among these lakes Thonak Lake is the deepest lake (62.4 m), followed by Gokyo Lake (43 m).

The trail will further take us to Gokyo Ri also known as Gokyo Peak which lies at the elevation of 5357m/17575ft, it will be a day hike for us but the trail further leads to some of the majestic passes including Cho La Pass and also to Everest Base Camp.

Apart from the Himalayas, the Gokyo peak will be a viewpoint to observe the Ngozumpa Glacier just below Mt. Cho Oyu covering an area of 22 miles is the longest glacier in the Himalayan region, and view of the majestic Gokyo Lakes all blue in color and Gokyo village will be one of the fabulous views to experience making it the real paradise on the earth.

Apart from the majestic Himalayas, the trek starts with the lowland view, rivers, crossing suspension bridges, passing by the most incredible town on the Himalayas Namche Bazaar, the Buddhist monasteries, praying wheel, praying flag, etc.

Besides all these majestic experiences the hospitality of the Sherpas community and their lifestyle will be the center of attraction for travelers. The surviving culture and religion of the Sherpa community along with the Gokyo lakes and Gokyo Ri will energize us with its beauty.

Discover Altitude has specially designed Gokyo Lakes and Gokyo Ri Trek Itinerary with frequent field visits by our professional staff to make sure the program goes according to the itinerary mentioned below.

For the convenience of our client minute detailed itinerary, cost, highlights, pictures, and the map has been provided. As it is an energetic trek in the Himalayas, so the trekkers can visit this trail every season throughout the year. Regarding the Gokyo Lakes and Gokyo Ri Trekking Cost, it varies on the number of days and people.

We are flexible to revise and customize the itinerary according to the allocated time and interest as far as possible to make sure the need and interests of our valuable clients are accomplished. Day 8:Trek from Machhermo to Gokyo

Day 9:Explore around Gokyo and hike to Gokyo Ri

Day 10:Trek down to Dole

Day 12:Trek from Monjo to Lukla

Day 13:Fly from Lukla to Kathmandu 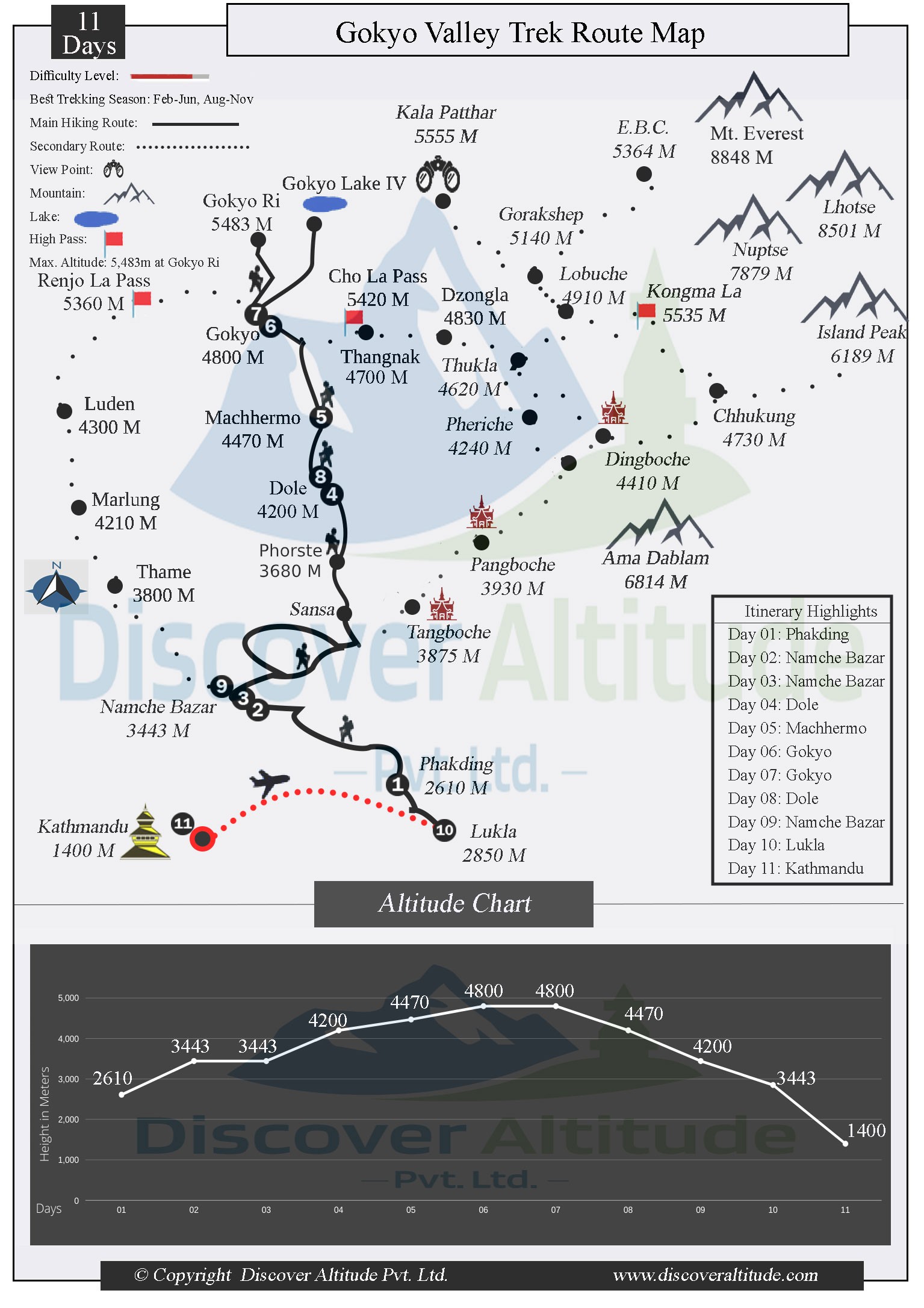 The airport picks up and drops off by the private vehicle. Q1. Where is Gokyo Lake and Gokyo Ri Located?

Gokyo Lake and Gokyo Ri are located in the Khumbu region of Nepal, it is a conservation area under Sagarmatha National Park.

Gokyo Lake lies at an altitude of 4800 meters and Gokyo Ri or Gokyo Peak with an altitude of 5357 meters. Gokyo Ri is an incredible hike for the magnificent views of the high Himalayas along with other lakes of the region.

the easiest and only way to get to Gokyo is to fly from Kathmandu( Manthali airport) to Lukla and trek into Sagarmatha national park.

This will be some 10 days trek depending upon the physical condition and interest of the trekker.

Q3. How far is Gokyo Ri from Gokyo Lake?

Gokyo Ri or Gokyo Peak is a hiking trail from Gokyo (an overnight stay), trekkers mainly hike the other day for the magnificent view of the Himalayas and other existing famous lakes.

Q4. Can we see Mt. Everest from Gokyo?

A big yes, Gokyo Ri which lies at an altitude of 5357 meters is one of the most incredible spots to experience the panoramic views of the high Himalayas and the surrounding lakes of the Khumbu region.

Apart from the panoramic views of the Himalayas, Gokyo Ri will entrail us with magnificent views of the different lakes of the region.

Q5. Is swimming possible in the Gokyo Lake?

Swimming at the 4800 meters won’t be a good idea, during winter the lake gets frozen and other times of the year it's very cold to experience swimming in the Gokyo Lake.

Moreover, Sherpa the local community of the Himalayas doesn’t practice swimming in the Himalayas, apart from this the lakes of the Himalayas carry religious and cultural importance for the Sherpa. Recently, there was news about three school children being drowned in the Gokyo lake.

So, we don’t suggest swimming in the Gokyo lake.

Q6. Can we trek from Gokyo to Everest Base Camp?

Trekking from Gokyo to Everest Base Camp or vice versa is possible, only the point here is it will take couple of more days. When we are into the Khumbu/Everest region the trail can be diverted into different areas.

As the Everest region has numerous trekking trail which can be enjoyed, the only point here it matters is about the interest of the trekkers