5based on 3 reviews
Price per personUS$1450
Customize Trip

Gosaikunda Trek, which lies in the Langtang region of Nepal, is an amalgamation of both beauty and spiritualism. This is one of the magnificent trekking trails for all the trekkers, which is situated in the remote areas of the Helambu, surrounded by the snow-covered Himalayas. The highest point to be reached in this trek is Gosaikunda Lake (4380 meters/ 14370ft) for an overnight stay, it is also known as the Frozen Lake of Nepal because the lake remains frozen during the month of winter.

There are more than 100 holy Kunda (lakes) both for Hindu and Buddhist pilgrimage. Hindu people believe that Lord Shiva had created this holy lake Gosaikunda with his trident to pacify his thrust after consuming poison (which came out during ‘Saaghar Manthan’ (between Gods and Demons), so that the poison may not destroy the living creature.

So during the month of August- September the day of the ‘Janaipoornima’ festival thousands of devotees both from Hinduism and Buddhism visit the lake for a dip, as it is believed that taking a dip in this holy lake will wash away all the sin from the body and soul so that when we die our soul will rest in heaven.

In the Langtang region, we will be able to view the settlements of Tamang and Sherpa people mainly of Tibetan origin. Apart from exploring the holy lake, we will be able to view wild forests, waterfalls, wildlife, etc. enchanting mountains is another attraction of this trek, Langtang Lirung(7246m), Gangchempo(5846m), and Dorje Lakpa(6966m), etc are some of the very close range of the Himalayas to witness.

Furthermore, the lifestyle of the people here will fascinate all the trekkers, Tibetan monasteries, and wild animals like mountain tar, snow leopards, jackal, rabbit, and monkeys, and moreover, the Red panda is another attraction of this region.

This 10-days trek into the Langtang region for Gosaikunda begins from Dhunche which is a 6-7 hours drive from the capital city of Kathmandu. This is a fascinating drive with beautiful landscapes, hills, forests, rivers, and mountains. Then the trek continues through the beautiful Rhododendron forests, which is also the national flower of Nepal. This Langtang region trek will lead to the villages, forest, and finally to Gosaikunda lake.

On the way, we will be surprised by the beautiful view of Mt. Manaslu, Ganesh Himal, and the Annapurna massif. After crossing Gosaikunda Pass or Lauribinayak Pass (4609meters/15122ft), we will be leaving the Langtang region and finally enter Helambu valley subsequently, our trek will end in Sundarijal and then drive back an hour to Kathmandu.

Gosaikunda Trek in the Langtang region of Nepal will take us to the pristine land of remote Himalayas for its magnificent beauty but closest to Kathmandu city. This 10-day Langtang region trek is easy to climb both in terms of distance and altitude. For beginners and layman trekkers Langtang trek will be the best start in the Himalayas.

Discover Altitude has a specially designed Gosaikunda Trekking Itinerary with frequent field visits by our professional staff to make sure the program goes according to the itinerary mentioned below. For the convenience of our client minute detailed itinerary, cost, highlights, pictures, and the map has been provided.

As it is a medium trek below the Himalayas, so the trekkers can visit this trail every season throughout the year, but the Pass remains close during winter when there is heavy snow. Regarding the Gosaikunda Trek Cost, it varies on the number of Days and number of Trekkers.

The itinerary can be customized according to the limitation of your time and interest.

Day 1:Arrival in the Tribhuwan International Airport and Transfer to your respective hotels.

Day 3:Drive from Kathmandu to Dhunche by Private Jeep or Local Bus

Day 7:Trek from Tharepati to Kutumsang

Day 8:Trek from Kutumsang to Chisapani

Day 9:Trek from Chisapani to Sundarijal (1350meters/4429ft) and drive back to Kathmandu. 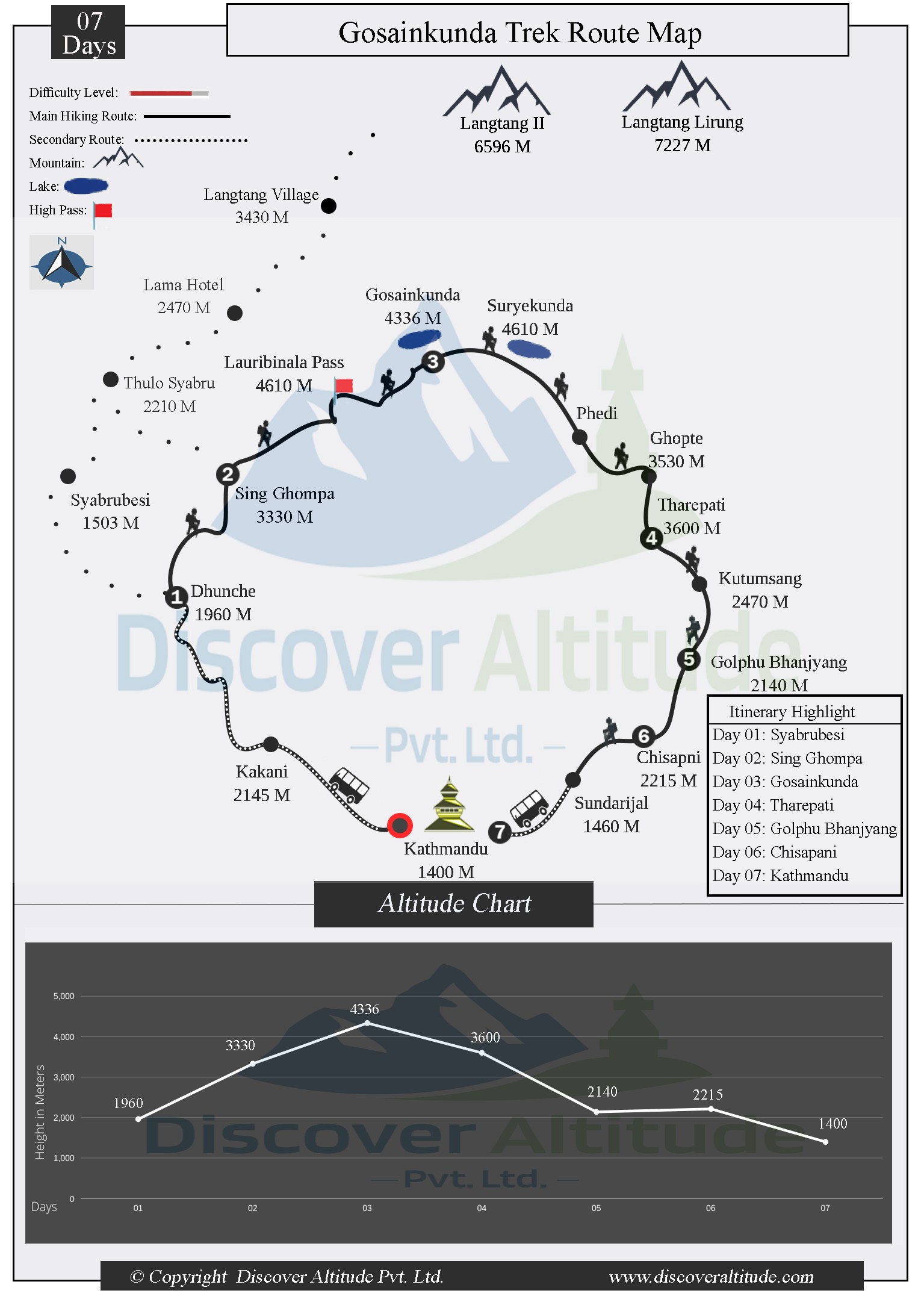