explore the cultural and natural heritage in a relaxing way.....

Nepal, a small country that lies on the lap of the highest Himalayas on earth is a landlocked country, bordering Tibet to the North and India to the South, East, and West. Despite its size being the 95th biggest country, Nepal is rich in every aspect.

Nepal holds numerous world records due to its nature and culture, with the highest mountain Mt. Everest, the highest pass on earth, rich in water resources, the highest settlement on earth, highest agricultural production land-field, etc.

Apart from nature, Nepal is a diverse country with 125 different ethnic communities living together and speaking 123 different languages and numerous religions being followed and also holds a record for following the Bikram Sambat calendar (also known as the Hindu Calendar), which is 56 years ahead of the Georgian calendar. This is the only official calendar of Nepal.

Moreover, Nepal observes numerous different New Years' which is of different ethnic communities, and is celebrated nationwide as an official holiday as well.

Now let me explain to you about each separately, where is it located, and what to explore around these sites.

Historical, Cultural, and Religious Heritage Sites in Nepal signify it is a man-made structure decades ago and carries historical, cultural, and religious significance. They are the typical architectural structures of the native ethnic community of the time being but now hold pride in the nation after the unification of Nepal in the 18th century by the Prithvi-Narayan Shah, who is also regarded as the father of the nation.

Kathmandu Durbar Square, popularly known as Basantapur Durbar Square is one of the popular UNESCO Heritage Sites of Nepal which is situated at the heart of Kathmandu district and a walking distance of Thamel, a popular touristic hub, never to miss.

This used to be one of the popular and powerful kingdoms of Kathmandu valley with the palace of the Malla kingdom, who were the ruler.

The history of Kathmandu Durbar Square can be traced back to more than 2000 years but at the moment you can see those structures standing from the 12th century AD. There are numerous temples, and shrines of both Hindu and Buddhist followers, with the living goddesses Kumari.

Kathmandu Durbar Square is a popular destination to explore the trail of the Hippies, who were popular tourists of the 1960s and ’70s. There are numerous temples of Shiva, Vishnu, Ganesh, Kalbhairav, Kamdev, Hanuman, and the tallest temple of Taleju Bhawani. 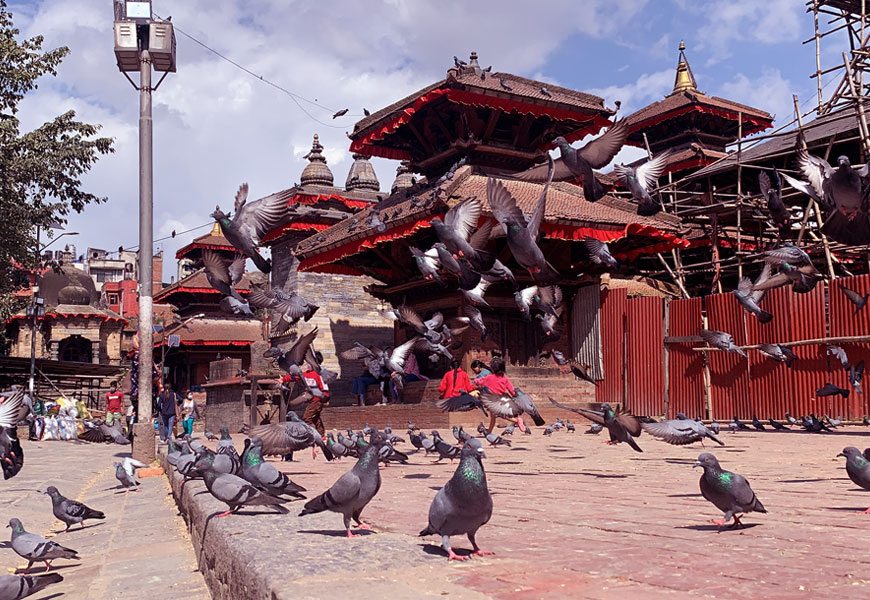 Swyambhu Nath Temple also known as ‘The Monkey Temple’, is one of the famous religious sites in Nepal. Situated to the west of Kathmandu city is just a 15-minute drive from the main city of Thamel.

The spot of the Swyambhunath lies on the top of a hillock, which is one of the finest places to explore the entire Kathmandu valley, Himalayas, and hills.

Apart from this view, the history of Swyambhunath can be traced back to SātyāYugā and is believed to be self-originated. There is a famous Stupa on the top of the hillock with numerous temples, shrines, monasteries, fluttering prayer flags, Mani, etc., and uncountable numbers of lived monkeys.

Hiking through 365 steps to the hillock will be an interesting climb to reach the top of the hillock. This can be an easy heritage walking tour for you to explore the ancient Kathmandu valley and historical sites.

The history of Patan Durbar Square can be traced back to the 2nd century BCE, through the four different Asoka Stupa installed by king Asoka of India.

Patan is mainly inhabited by the Newari community, an ethnic group of Kathmandu valley. Rich in art and artistic, Patan is famous for its unique temple structure, Buddhist shrines, monasteries, ponds, hits, etc.

There are uncountable numbers of temples and shrines all around the Patan city and a day will be less to explore together.

One can visit the palace of the Malla king, temples, and artifacts in the museum and the area are open to exploring, and sitting around the temples and watching the daily activities of the local will be one the interesting things to do.

Pashupatinath Temple is one of the famous Hindu temples dedicated to Lord Shiva. It is a center of eternal bliss, a temple to attain liberation. Visited by millions every year, Pashupatinath holds a prominent place in the entire Hindu community.

The history of the temple is unknown but is traced back to the period of SātyāYugā. There are numerous Hindu temples, shrines, and ashrams, along with cremation spots. Located on the bank of the river Bagmati, the Pashupatinath Temple is one of the popular Hindu pilgrimage sites.

Covering a wide area, entrance to the main temple is strictly prohibited to non-Hindus but the cremation center is open for all to see the life and death rituals in Hindu philosophy. The main temple is built with pure gold and silver donated by kings and devotees.

Shivaratri is one of the most popular celebrations observed in the Pashupatinath Temple, where thousands visit to pray from around the world and everyday evening a huge Pashupatinath Aarati is organized on the bank of the river facing the temple. This is open to all religious followers.

Bouddhanath Stupa is a popular Buddhist shrine and is one of the centers of Himalayan Buddhism studies. Located in the northeastern corner of Kathmandu, Bouddhanath is a mandala structure and one of the biggest of its kind surrounded by dozens of different sects of Buddhist monasteries.

The history of Bouddhanath Stupa can be traced back to the 5th century AD but the structure was renovated frequently. With a large number of praying flags around, the stupa is decorated in white and yellow color with kilos of pure gold on the top.

Every day in the morning and evening, all the surrounding monastery gets open to the public and praying ceremonies are organized with the beating of drums and monastic instruments.

Bhaktapur offers everything for a tourist, from culture, religion, and lifestyle to the finest architecture. With the largest temple at Natapola, the palace of the king, royal bath, etc. Bhaktapur has four different squares to explore. 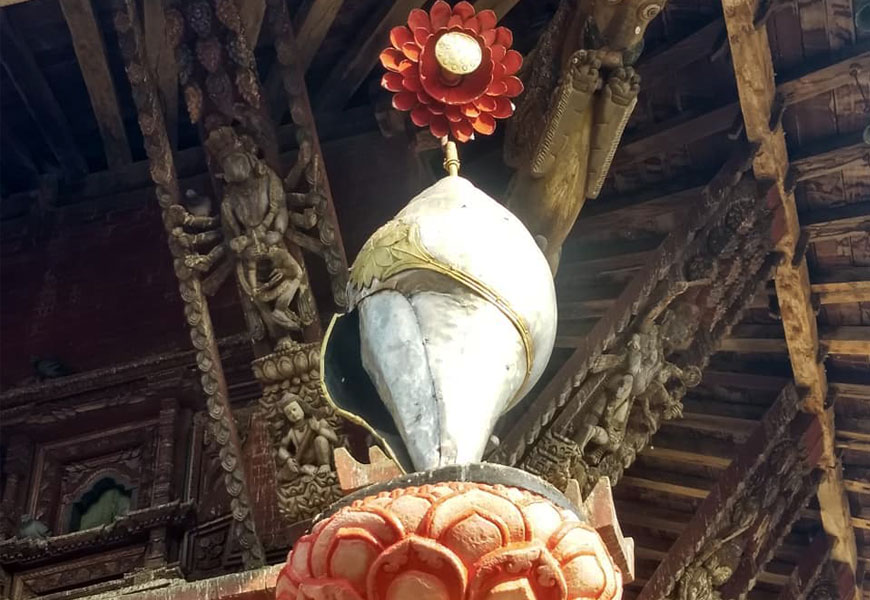 Apart from the temple, there are numerous other stone-carved images of Lord Vishnu around the temple premises and are the finest ones dating back to the 5th century. The temple depicts the story of Vishnu’s reincarnation and the location provides an attractive view of the Langtang Himalayan range. 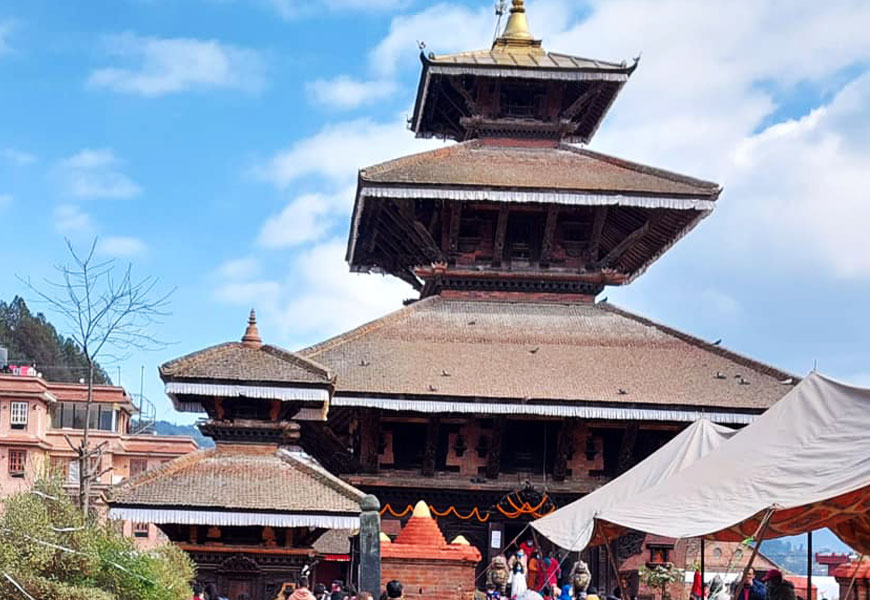 Lumbini once the kingdom and the birthplace of Lord Buddha is a center Buddhist pilgrimage site. Lumbini has always been a popular destination for pilgrimage from the globe. It was a kingdom where Lord Buddha was born. 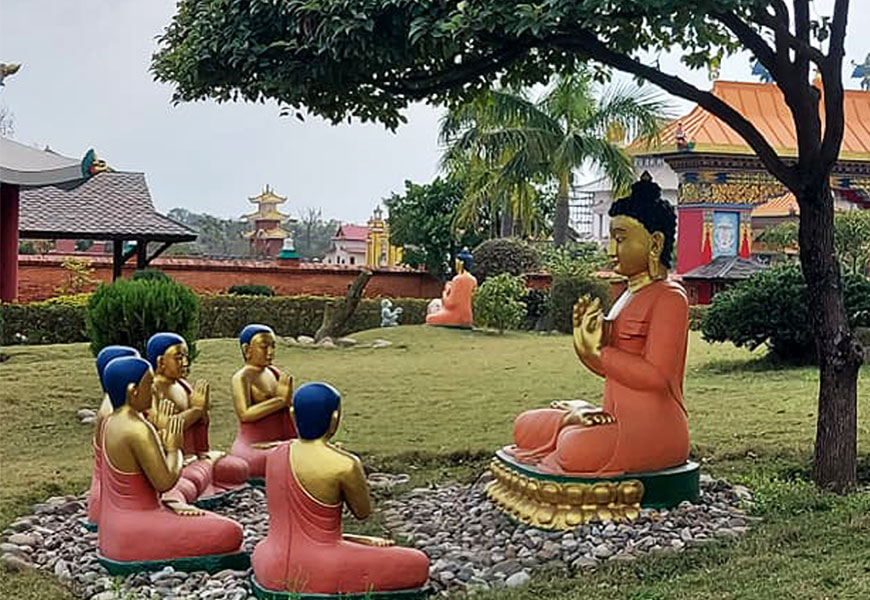 The importance of Lumbini is highlighted with numerous monasteries built by different sects of Buddhist followers and is still going on.

Lies to the western part of Nepal in Rupandehi district, Lumbini borders India. A cultural tour to Lumbini will bless one with eternal bliss, and enlightenment and explore the exotic cultural life of rural Nepal.

Apart from this, Lumbini occupies an immense place in the history of Nepal, with religious and cultural significance. The area is a protected zone with a peaceful pagoda, eternal flame, monasteries built by different countries, and a park for wild animals and different species of birds. 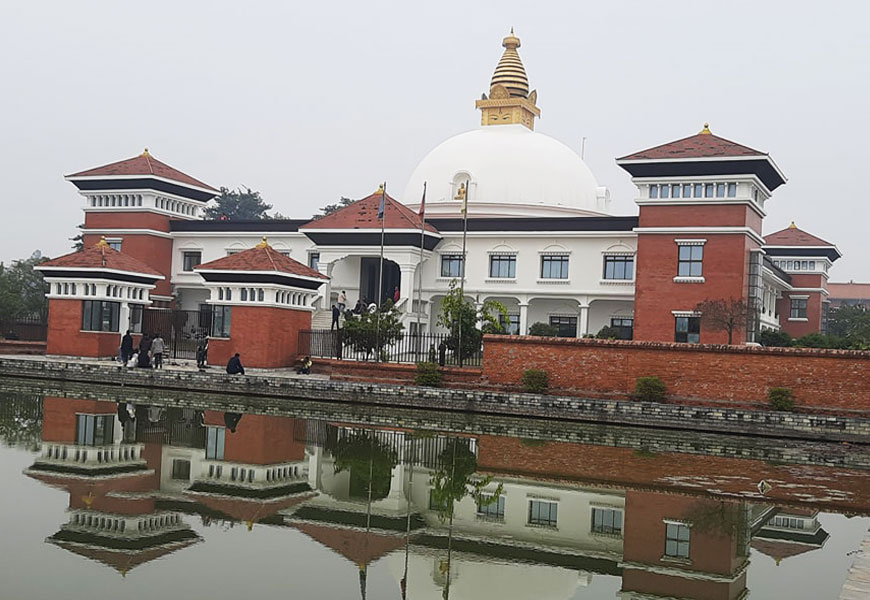 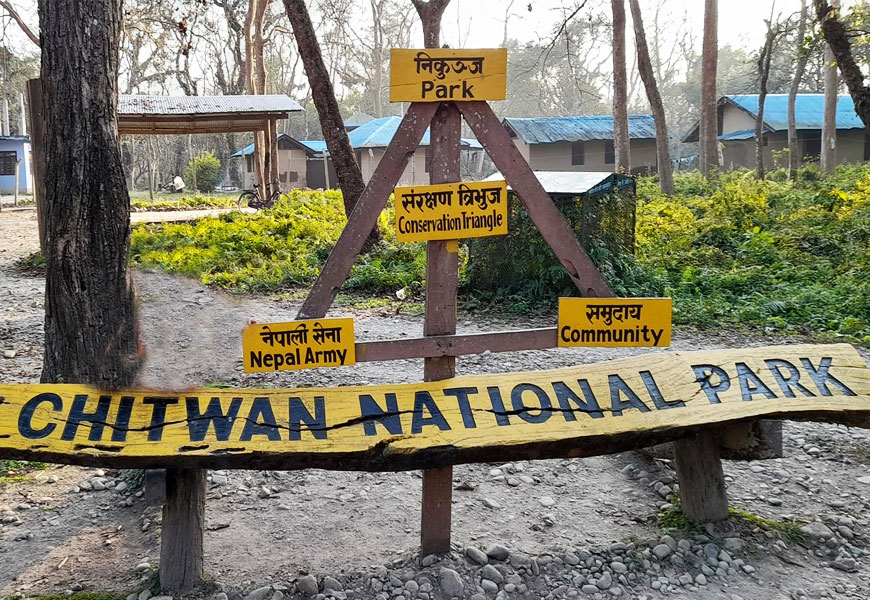 The park is a rich area of the terai region of Nepal and home to 68 species of mammals, 544 species of birds, 56 species of herpetofauna, and 126 species of fish have been recorded so far. Mainly inhabited by the Tharu community, the park opens doors for Jeep Safari, Elephant ride, Nature Walk, Rafting on Rapti River, Bird Watching, Exploring Bis-Hazari Taal (lake), etc. 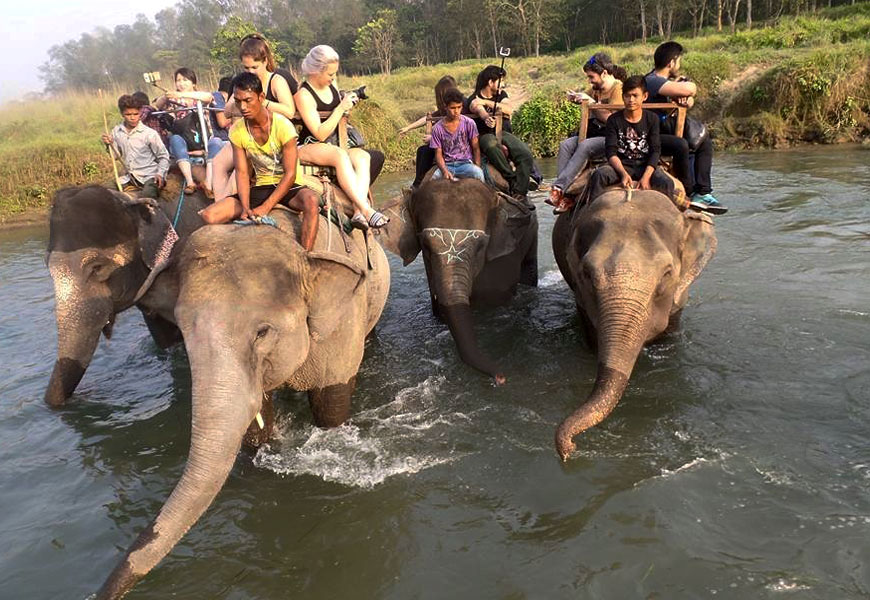 Sagarmatha National Park is one of the highest established national parks in the world in terms of its altitude. Located in the eastern Nepal of Solukhumbu district, the park holds the highest mountain on earth Mt. Everest.

Established as a national park in 1976, the park was listed as the first UNESCO Natural Heritage Site in 1979 AD. Holding a record for preserving Himalayan flora and fauna, Sagarmatha National Park is the gateway to Everest Base Camp along with other enchanting Himalayas.

Apart from these, Sagarmatha National Park is a gateway to numerous Himalayan trekking trails, expeditions, peak climbing, the highest monastery, etc. and Namche Bazaar is one of the popular destinations, never miss, which lies within the park. 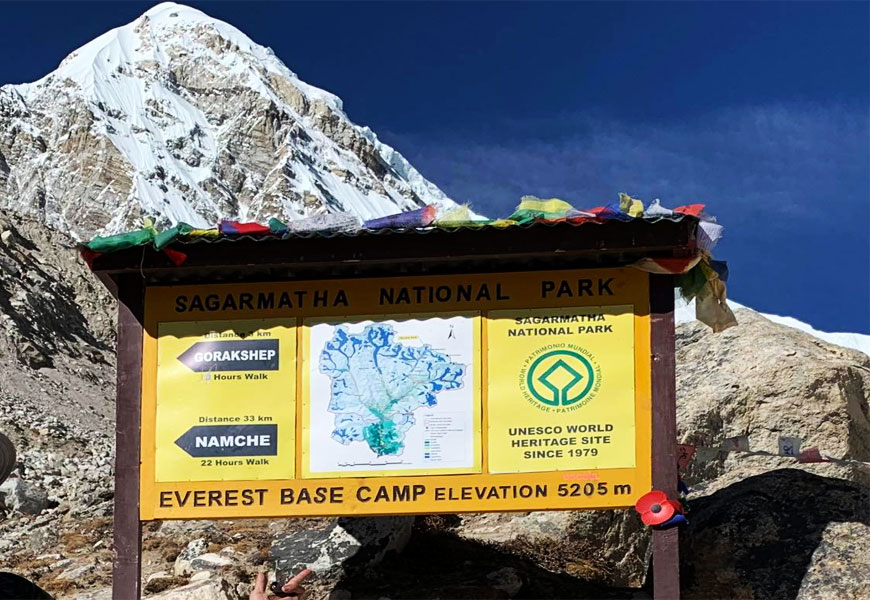