explore the diverse art and culture in a short distance....

Kathmandu valley is really a fabulous destination to explore the varied range of diversity in a short distance. Surrounded by hills around, Kathmandu valley comprises three different districts, namely Kathmandu, Bhaktapur, and Lalitpur.

These were the popular kingdoms before the unification in the 18th century. Well preserved and maintained the popular historical and cultural sites of the valley. Kathmandu valley has 7 UNESCO Heritage Sites.

All these sites are rich in arts and architecture with diversity in religion and culture. Standing still the wooden temple, stone-built temples, palaces, stupas, monasteries, etc. for decades. 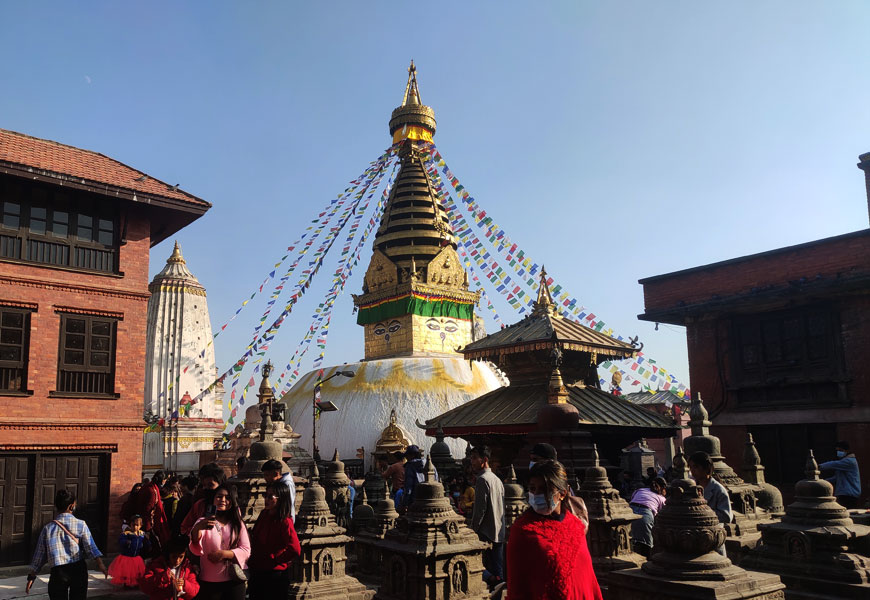 Swyambhunath Stupa, also known as Monkey Temple is one of the attractive destinations for tourists. This site lies on the top of a hillock, blessing us with a magnificent view of the entire Kathmandu valley, hills, and the Himalayas.

There are numerous temples, monasteries, and Buddhist shrines along with a huge stupa. This makes Swyambhunath a place popular for both Hindu and Buddhist followers to conduct day-to-day rituals and celebrations.

The history of Kathmandu valley itself begins with this hillock and the present structures date back to the Lichivi era (5th-6th Century).

Katmandu Durbar Square or Basantapur Durbar was one of the popular kingdoms of the Malla era. This was a separate kingdom but after unification by the Shah king, Kathmandu Durbar Square became the headquarters of the entire nation.

Temples are open for the devotees in Kala-Bharaib, Kumari Gar, Ashok Binayak, and Khastamandap, and visiting Kumari gar to have a view of the living goddesses will be one of the best.

Pashupatinath Temple, a centre Hindu pilgrimage site is another popular destination to observe the Hindu lifestyle and the open cremation on the bank of the river Bagmati.

This temple is mainly related to Lord Shiva, one of the most worshipped Hindu gods is surrounded by others as well. The main temple courtyard is forbidden from tourist entrances but can be explored from the other side of the river.

There are thousands of Shivas Linga around the temple premises and holy saddhu (aesthetic monk) sitting around will be another opportunity for some pictures.

Apart from all this, devotees with their families gather to conduct ritual ceremonies that will be a very lively experience, apart from cremation on the bank of the river.

Bouddhanath Stupa mainly is related to Buddhist devotees and is surrounded by dozens of monasteries. Bouddhanath is one of the famous pilgrimage sites of Vajrayana followers and also Tibetan Buddhists.

The stupa is the largest of its kind with abundant pure gold used to rebuild after the earthquake of 2015. Painted with white and yellow colours, the stupa holds the holy relic of the third buddha.

Different sects of Vajrayana followers have been operating their monasteries and are centres for Buddhist practitioners. 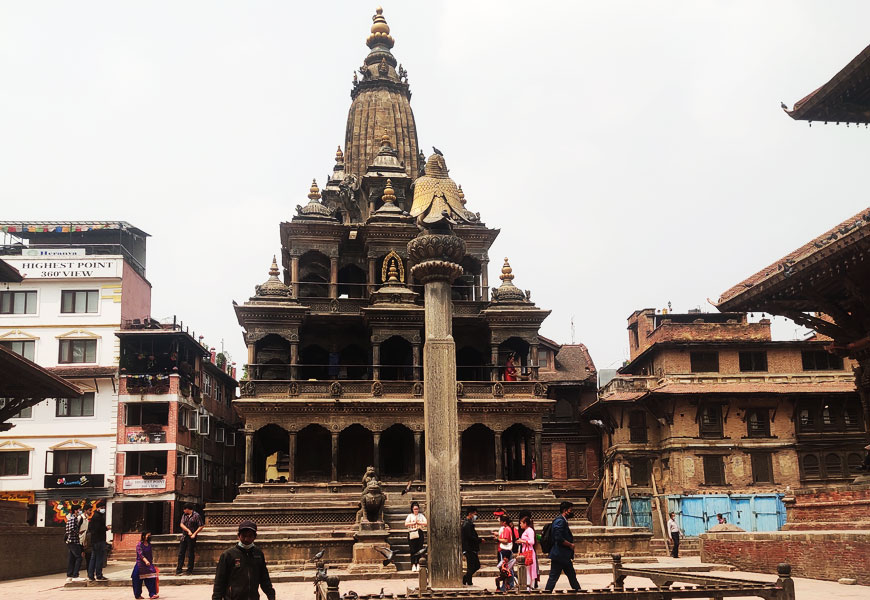 Patan Durbar Square is one of the artistic centres of the entire nation. Surprised by its arts and artefacts Patan is one of the finest UNESCO heritage sites in the country.

Located in the Lalitpur district of Nepal, the history of this little town dates back to the 2nd century BC. Mainly inhabited by the Newari community, Patan holds hundreds of temples and Buddhist shrines.

This well-managed city was one of the Malla’s kingdoms and was the centre of handicraft production. Beautifully build temples, both wooden and stone curved, one can explore the popular Taleju Temple, Charnarayan Temple, Krishna Temple, Bhimsen Temple, Harishankar Temple, Golden Temple, the Palace, Sundari Chowk, Mulchowk, museum, Hiti, etc,

Bhaktapur Durbar Square, unique in itself is one of the first kingdoms of Kathmandu valley. Mainly inhabited by the Newari community, Bhaktapur is also known as Bhadgaun and Khowpa.

Almost 100 thousand people live in this kingdom, Bhaktapur is a well-preserved heritage site with all the required facilities for its citizen. Starting with the tallest temple of tantric goddesses Maha Laxmi, the trip will end with the unique temple of Dattatreya.

You can visit the cremation sites at Hanuman Ghat and explore the largest shiva linga on the bank of the river. Further, Bhaktapur is also a unique destination to explore the Himalayan range on a clear day.

With 6.88 sq. km, Bhaktapur is the largest kingdom with hundreds of temples, Buddhist shrines, Patti, Hitti, Bahas, etc. joined houses together to picture the real identity of the local dwellers. Small allies will take your day tour to a fabulous destination. 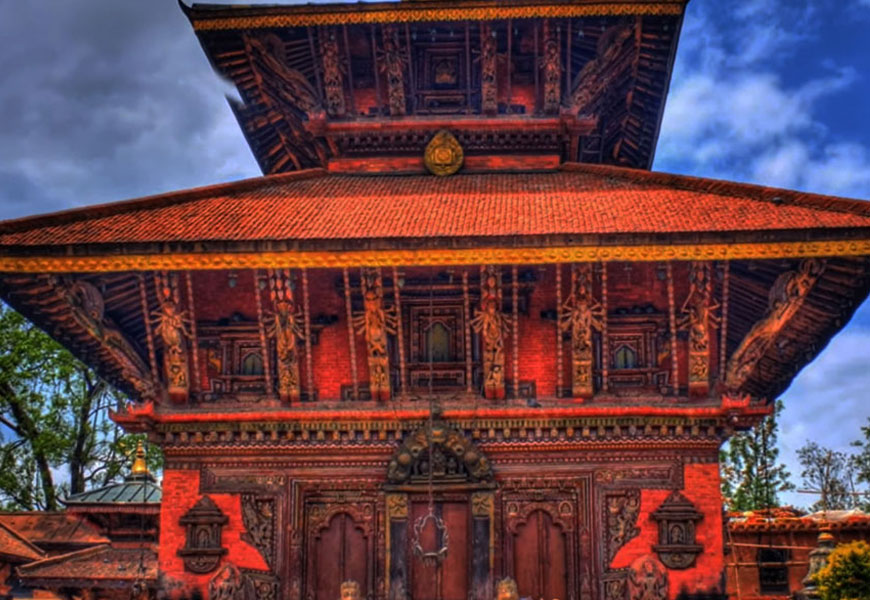 Changunarayan Temple is the seventh UNESCO Heritage Site of the Kathmandu valley, which lies at an altitude of 1550 meters above sea level.

Changunarayan Temple has mainly dedicated to Lord Vishnu and his reincarnation and its history date back to the 2nd century AD. Filled with artistic stone images of gods and goddesses, Changunarayan is a centre for Vaishnavism followers.

Inhabited by different ethnic communities, Changunarayan is a popular village named after the temple where you can explore the typical Tamang community village and do some hiking around.

Other related UNESCO Heritage Sites of Nepal away from Kathmandu Valley include Lumbini, Sagarmatha Conservation Area, and Chitwan National Park.

If you want to explore popular sites of Nepal which are never to miss, please contact Discover Altitude for relevant inquiries regarding your journey into Nepal.