Top 5 Festivals Celebrated in the Himalayas of Nepal : A real experience, never to miss

a journey with celebration into the Himalayas to make it lively experience once in a lifetime...

Festivals are always meant to be celebrated, it is to rejuvenate self, family, and the entire community, and Nepal being a country rich in diversity in every aspect is always in a festive mood.

Despite their ethnicity, citizens always enjoy festivals and are meant a public holiday, feasting, singing, dancing, and much more to entertain.

Nepal a country where the ethnic group is dispersed in every nook and corner of the country helps to understand and know each diversity and their festival is meant as a national festival to others as well.

Although Dashain, Tihar, Holi, Jatras, etc. are more popular and carry the colorful images of Nepal, still there are tens of popular festivals in Nepal. This blog does not mean to explain all the festivals and celebrations but will mainly focus on the top 5 popular festivals of the Himalayan region and how and why they are celebrated.

When we talk about the Himalayan region, we need to be clear that there are different ethnic groups living in the Himalayas of Nepal. This dispersion of the group varies from region to region.

As Annapurna region is popular for the Gurung community, Langtang for Tamang, and Everest for Sherpas. These are some of the regions just to the state but in every region, there are mixed ethnic communities living together due to migration, marriage, etc.

Now, let’s deal with the top 5 popular festivals and celebrations of the Himalayan region in Nepal.

Mani Rimdu Festival is one of the major festivals of the Himalayas and is only celebrated in the Everest region. The history of the Mani Rimdu festival can be traced back to Tibet and has been practiced in Nepal since the 19th century.

This is celebrated for 19-days, but only the last 3-days celebration is opened to the public and is performed in the open area of the monastery in Tengboche, Chiwong, and Thame. Falls mainly on the month of October or November according to the Tibetan calendar, the head of the Tengboche monastery determines the date according to the ritual ceremony and is made public months ago. For details please contact Discover Altitude.

Mani Rimdu Festival is mainly celebrated in the Monastery and the surrounding areas, where Sherpas and Monks gathered to perform Shamastic appearance with mask dance, ritual ceremony, feasting, etc. every year hundreds of trekkers participate to observe the Mani Rimdu Festival.

When the date for the festival is marked by the monk, preparations are made and the monk practices ritual dance and mask dance prior to the date of the festival. Different mandalas are designed with sand, barley flour, etc. which is a symbolic offering to the great soul, and the Tengboche monastery is one of the finest places in the entire Everest region to observe the Mani Rimdu Festival.

Mani Rimdu Festival is celebrated to mark the foundation of Tibetan Buddhism by Guru Rinpoche also known as Padma Sambhava. His effort to establish ‘Dharma’ or ‘Righteousness’ is remembered throughout the celebration.

Sacred mask dances are performed by the monks with unique religious costumes, replicating the deities to scare away the evil spirits. Starting with the decoration of the open sand mandala, the festival ends with destroying it and offering it to the Nagas- the serpent gods.

Throughout the festival, monks chant ritual hymns for the wellness of the eternal beings and world peace.

So, if you are planning a trek to the Everest Base Camp, try to arrange your itinerary according to the Mani Rimdu Festival. This will really be once in a lifetime experience.

Tiji is a 3-days festival of the Upper Mustang and is celebrated with jubilant enthusiasm by the locals. The history of the Tiji Festival can be traced back to Tibet as its origin and is related to Tibetan Buddhism founded by Guru Rinpoche, also known as Padmasambhava, somewhat in the 8th century AD. He is regarded as the founding father to spread Tantric Buddhism in Tibet and the Himalayas of Nepal.

The history of the Tiji festival can be traced back to the time when the myth was popular among the people. It was the time when people believed in tantric practice and meditation, through tantric gurus they tried to find out the cause and effect of their common suffering.

According to the famous myth once a very powerful man-eating demon created havoc in the Mustang region, as he was not having sufficient humans to eat due to obstacles created by the tantric guru.

The tantric guru was creating trouble for the demon through his powerful practice of tantrism. So, to revenge, the demon created a scarcity of water and spread unknown diseases in the valley of Mustang and the surrounding areas.

This incident created life-threatening trouble for sentient beings, including the death of animals and humans. Even the main gurus (spiritual teachers) of the area were helpless to demonic power.

To cope with this inhuman act, they invited Dorje Jono who was a very powerful tantric spiritual teacher. He helped to chase the demon from the region through his powerful spell of spiritual practice and guarded the whole valley through his spell.

So that, the demon won’t be able to enter the region again. This made the demon keep away from entering the valley and the lifestyle became normal.

To mark the victory over evil Tiji Festival is celebrated every year. It has now been observed in a broader sense, as it is also a ritual ceremony for ‘World Peace’ and ‘Victory of Good over Evil’. Native believe the ritual 3-day ceremony will bring eternal blessing to all sentient beings.

Tiji Festival is a very popular festival in the Upper Mustang region which includes seven villages in the region. This 3-day festival is observed with colorful ceremonies, dances, and ritual songs by the monks of the monastery.

The festival is guided by the royal family members of the kingdom along with the villages. It is a tantric dance by the monks, the main dancer/performers are chosen within three months of the festival and do all the training and ritual ceremonies until the final day of the festival occurs. Royal family members, villagers, and travelers from around the globe observe the colorful festival, as it is believed being part of the ceremony will lead one to eternal bliss.

The date for the Tiji Festival is not predictable, it is celebrated according to the Tibetan calendar and the main monks of the surrounding monastery decide the date through ritual techniques. This year the 3-day Tiji Festival 2022 will be celebrated from 27th May 2022 to 29th May 2022. 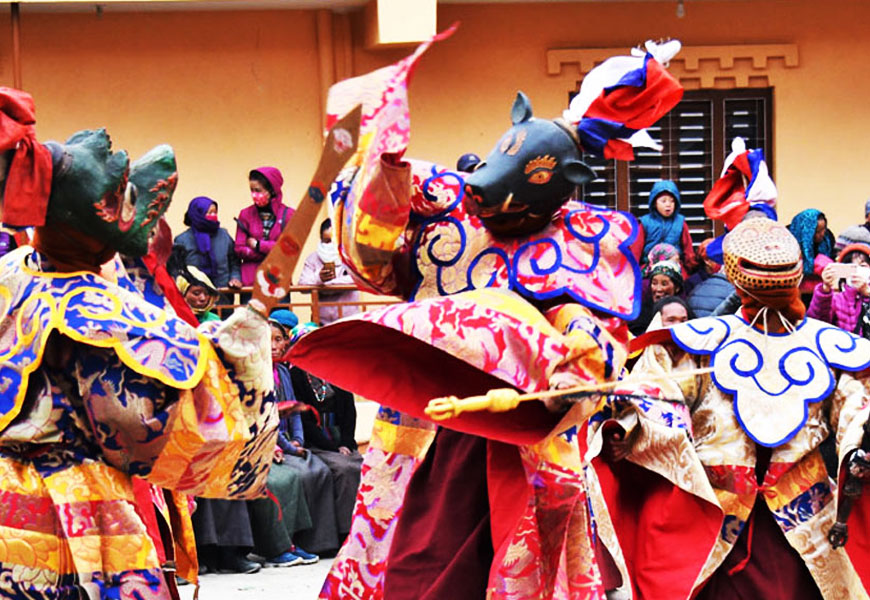 Lhosar literally means ‘New Year’ and Nepal observes dozens of new years followed through different calendars practiced by different ethnic groups residing in Nepal. There are 3 different Loshar accordingly to the ethnic community, Gyalpo Lhosar of the Sherpa community, Sonam Lhosar of the Tamang community, and Tamu Loshar of the Gurung community. 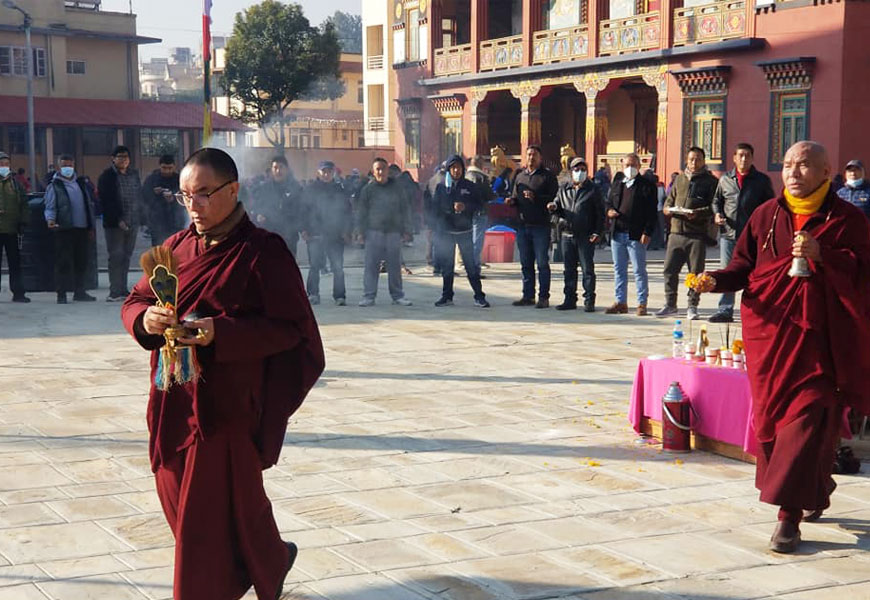 Gyalpo Lhosar is a new year celebration by the Sherpa community mainly residing in the Everest region of Nepal. It is a new year that falls during the month of February or March according to the Tibetan calendar.

People wake up till midnight to observe the new beginning and wish their friends, family, and relatives. They celebrate the new year by singing, dancing, feasting, inviting guests, and also, they visit monasteries to pray.

Apart from this, they clean their house and surrounding areas to welcome good luck and prosperity. Varied ethnic dishes are prepared to serve guests and some are carried to the monastery to serve the monk.

Sonam Lhosar is a new year of the Tamang community mainly residing in the Langtang region of Nepal, which is a popular trekking destination as well.

Tamang community celebrates Sonam Lhosar on the 1st new moon day of the 10th month of the Nepalese calendar. This mainly falls either on the month of January or February according to the Georgian calendar.

House is cleaned and gifts are exchanged between their near and dear ones. People visit monasteries and houses are decorated with colorful clothes dedicated to Buddhism.

And during the first day, they gather in nearby open areas to perform singing and dancing in local ethnic attire. 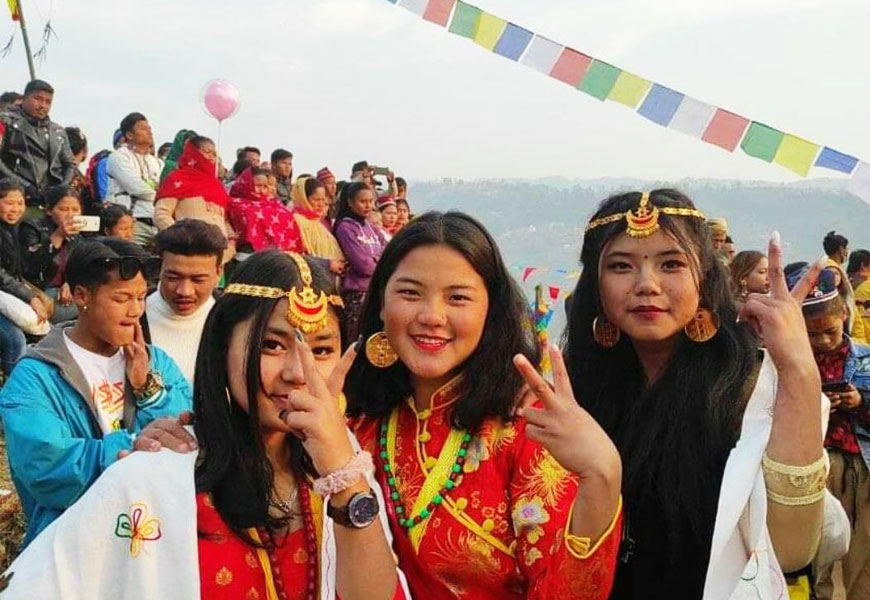 Tamu Lhosar is a new year of the Gurung community and is also regarded as the warrior group. This is so because their history has always been related to battles fought. They are the ethnic community that serves as an army in the British army, Indian Army, Singapore Police, and also Nepali Army.

Gurung is mostly dispersed communities in Nepal residing in every nook and corner of the country and Tamu Lhoshar is celebrated everywhere. Mainly inhabited at the foothill of Annapurna and Dhaulagiri region of Nepal. 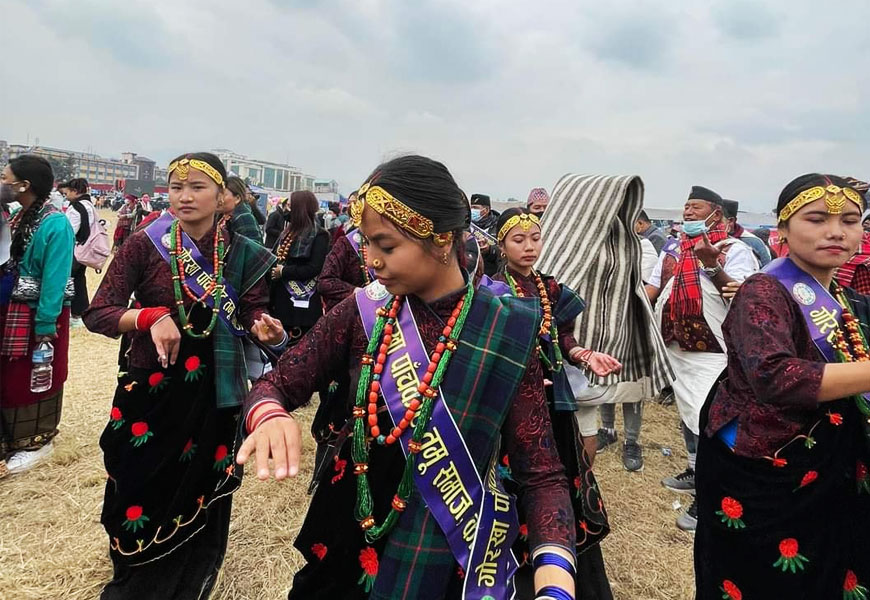 Tamu Lhosar is celebrated in the 9th month of the Nepalese calendar and falls during December or January of the Georgian calendar.

People wear ethnic attire and gather in the park around to celebrate the new year in a colorful way by singing, dancing, and also visiting monasteries and temples. They exchange gifts with their near and dear ones invite guests and serve typical community food. 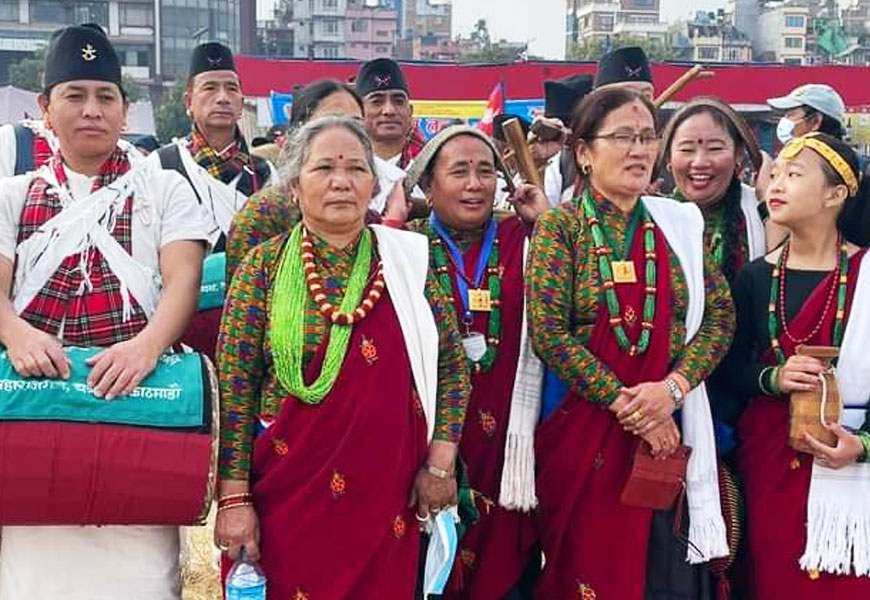 Dumji Festival is mainly celebrated in the Everest region by the Sherpa community to mark the birth anniversary of the great Guru Rinpoche, "Sanga Dorje".

Dumji is celebrated mainly by the village community in the monastery of Tengboche, Namche Bazaar, Phakding, Pangbuche, Thame, and Khumjung villages of the Everest region.

Where the locals and the monks perform the ritual performances, aesthetic dancing, reciting mantras, etc. to remember Guru Rinpoche and his teaching of Buddhism, which falls mainly during the month of May or June according to the Georgian calendar.

Yartung mainly refers to entertaining festivals after long hectic months of labor on the farmland. Yartung mainly is celebrated in the Manang and Mustang region of Nepal in the month between July to September.

Local gathers and dress up in ethnic attire and ride their horse to show their horsemanship. This is mainly a game among the male member to show their skill and courage. The rider is supposed to pick the silk shawl placed on the ground while the horse races its speed and the one who collects maximum in numbers is declared the winner.

People also gather around to sing and dance and share their long experience of labor and visit monasteries for a better life and the good fruits of their long labor.

Thus, the Yartung festival is a relaxation and entertainment celebration as well. This helps the community to come together and share their experience at the meeting point, which they had missed for a long time.