a journey into the hills and Himalayas of Nepal...

The Himalayas, Himalayas,s, or Himal are possibly one of the most researched words in history who are fascinated about the heights and formation of mighty mountains. This is a general picture for those who prefer trekking in Nepal. When it comes to Nepal, the white snow Himalayas follows you all around and are visible from all the three different geographical areas, namely Plain Tarai, Hills, and the Himalayas.

Even trekking in the hills of Nepal is the best destination to explore the Himalayas. This can be a day hike or a couple of days trek into the lower altitude.

The Himalayas mainly can be seen in Nepal, Tibet, India, Pakistan, Bhutan, and Afghanistan, with different names based on local culture and religion. And among them, Nepal holds the record with the highest numbers and also the tallest in the world.

The Himalayas in Asia carries religious significance, mainly related to myths. It is the abode of gods and goddesses, thus making the snow-covered mountain more religious and pious. Still, there are many aesthetic beings who traveled far into the Himalayas for meditation and penance.

This is applicable to both Hindu and Buddhist religions which are the two popular and dominant religions of South Asia.

There are numerous temples and Buddhist monasteries built into the high Himalayas and the spiritual vibrant can be experienced. Devotees visit those temples and monasteries as pilgrimage sites to attain liberation from the materialistic world.

History of the origin of the Himalayas of Nepal

The Himalayas are a long range of high mountains formed around 50-60 million years ago due to moving underground. It was a movement when different tectonic plates collided below to form a hump of solid rock rising upward.

This was so because both the Indian and the Eurasian plates underneath were of similar density, thus huge compressed solid raised from the ground to form the Himalayas millions of years ago.

This process continues for a long period of time to be called the Himalayas and making Mt. Everest the highest point on earth (8848.86M).

One interesting fact about the Himalayas is that they keep on raising and numerous other mountain peaks are taking new shapes and sizes.

In 1954, a survey of India measured the height of Mt. Everest for the first time in its history, and was officially declared to be 8848 meters. After 67 years Mt. Everest gained almost a meter of its height and still keeps on rising due to the underneath activities of the tectonic plates.

In 2020 with the combined effort by the governments of Nepal and China together measured the new height of Mt. Everest was officially declared to be 8848.86 meters.

How highs are the Himalayas of Nepal

The Himalayas of Nepal extends almost 800 KM from Kali River in the east to Tista River in the west. Nepal holds 26 percent of its land as the Himalayas with least populated and to be called a Himalaya the height and the range also matter.

The height of the Himalayas keeps on changing due to the tectonic plate underneath the ground. The Indian and the Eurasian plate underneath actively collide with each other to form new mountains and the existing ones keep on rising.

Which are the popular trekking trails in the Himalayas of Nepal

Trekking into the Himalayas of Nepal is always an adventure. This will take you to one of the most attractive destinations far from the materialistic world.

There are multiple numbers of trekking trails in the Himalayas of Nepal, which have been mainly categorized into three popular ways: Peak Climbing Trek, High Himalaya Trek, and Low Himalaya Trek.

Peak climbing trek will take you mainly through the trail into the altitude below 7000 meters. This will be a trek along with a climb into one of the popular peaks of the Himalayas, such as Island Peak, Mera Peak, Lobuche Peak, etc.

High Himalaya Trek will bless you with the majestic view of the mountains through-hike, into the Base Camp of the high mountains, through the high passes, and Himalayan lakes to descend. This includes Everest Base Camp Trek, Three Pass Trek, Annapurna Base Camp Trek, Ama Dablam Trek, Dhaulagiri Trek, Round Annapurna Trek, etc.

Apart from this, there are tens of multiple choices for a short trek into the Himalayas of Nepal. These are in the lower altitude as compared to Peak Climbing Trek and High Himalayan Trek.

What are the highlights of the Himalayas of Nepal? 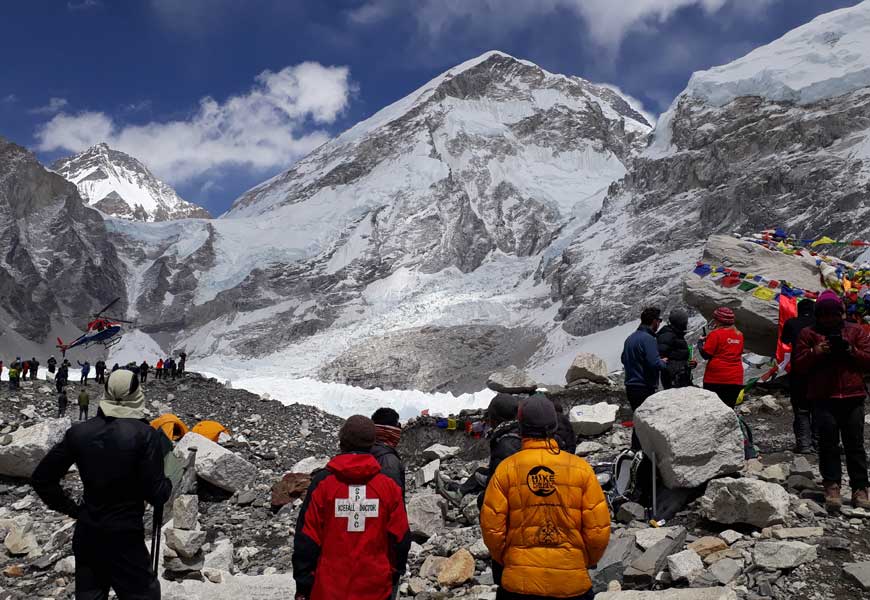 Almost 26 percent of the land in Nepal is occupied by the Himalayas of Nepal. This terrain is divided into mainly two different parts: High Himalayas and Low-land Himalayas.

One of the most attractive views is to explore the varied vegetation along with a majestic view of the surrounding Himalayas.

In the lower altitude, the trek will provide you with ample diversity of the different communities, their hospitality, culture, and custom, religious diversity along with unique flora and fauna.

Further, as you ascend higher Himalayas will be less populated only limiting to the Sherpa community. Villages are smaller in size and scatted around. It will be a solitary hike in nature, with magnificent views from the higher point and Himalayan wildlife including mountain birds.

What is the best time to trek into the Himalayas of Nepal?

Trekking into the high Himalayas is possible throughout the year. This is so because the weather remains far better than in the lower areas. There is a low possibility of rainfall even in the monsoon season when the lower area receives the maximum amount.

In spite of all these, trekking into the high Himalayas will be better during the Spring and Autumn season. This includes the month of February, March, April, May, August, September, October, and November.

During this time of the year, the weather is at its best. With a clear majestic view of the blue sky. No monsoon cloud around to block the trail at the lower altitude.

Normally at the high altitude, you will not experience any rainfall but your trek mainly starts from the lower altitude. During the Monsoon (June and July), trails at the lower altitude are not in good condition.

You will experience rainfall and the trek might be affected, sometime no flight to the destination due to rain.

And during the winter (December and January), trails will be excellent at the lower altitude but at the high altitude, there will be extreme snowfall with the possibility of avalanches leading you to stuck in a particular camp for a couple of days.

So, better recommended to choose Spring and Autumn seasons for the high Himalayas trek above 4200 meters.

How difficult is it to trek into the Himalayas of Nepal?

Trekking into the Himalayas of Nepal is a challenging task, starting with a moderate hike will take you to a strenuous climb This is applicable throughout the extended Himalayas of Asia. This concept is mainly generated through two different perspectives.

First, the trail, trekking into the Himalayas always starts at a low altitude with a well-maintained trail. This is because locals frequently maintain those trails for their personal use as well.

Now as you ascend higher, the locality gets narrowed making fewer inhabited reside. Thus, the trails will be rarely maintained (December-January).

Secondly, the altitude, starting with a lower altitude and maintaining a nominal pace is the best to overcome any altitude problem. As you hike higher the level of oxygen declines, thus if your body is not acclimatized properly there is the possibility of altitude-related symptoms.

Do people live in the Himalayas of Nepal?

Yes, people do live in the Himalayas of Nepal. Till 3500 meters there will be a different settlement of ethnic communities but as you ascend higher this community will be limited mainly to Sherpa.

Sherpa is a popular high mountain community descended from Tibet. They have great capability to acclimatize to high altitudes and are the one who is excellent climbers as well.

Sherpa lives their life through cattle rearing but now they work as a guide, porter, and climbers as well to help tourist accomplish their dream of stepping at higher altitudes. Apart from this all the lodges and tea houses are mainly operated by the Sherpa family (at high altitude)

Where will trekkers stay while trekking into the Himalayas of Nepal?

Travelers' interest to explore the high Himalayas of Nepal is increasing day by day. It was a difficult task some decades ago due to difficulty in camping overnight, but now there is a sufficient number of lodges and tea houses throughout the trekking trail.

But are far better to survive at a higher altitude and are affordable as compared to camping treks.

What is the temperature like in the Himalayas of Nepal

The temperature in the Himalayas of Nepal is very unpredictable, this is due to different factors but is mainly affected by the altitude ranging from 3300 meters to 8848.86 meters.

In every 1000 meter gain the temperature declines up to 6.5° Celsius and will continue. This is due to air pressure at a higher altitude.

The temperature in the Himalayas varies with the season as well. Normally during other times of the year apart from winter (November-February) but December and January are extreme wintertimes in the Himalayas of Nepal. So, you can avoid planning any trek which is above 5500 meters.

Heavy snowfalls occur, creating a blockade to the trail, during December and January. During this time of the year temperature will decline to -25°C at night and -7°C during the daytime of the year.