Everest Base Camp Trek in September 2022

September is the beginning of Autumn in Nepal and the starting of winter. This time of the year is the beginning of trekking and expedition season as well. As autumn makes the sky clear, making it looks blue in colour and has magnificent vegetation throughout the trail.

Temperature is mild with neither too cold nor warm and rain remains far away throughout the trek. As this is just the beginning season of the trek after the rainy season, you will find comfortable lodges and selective rooms for a comfortable overnight stay.

Everest Base Camp Trek is a dream destination for many but some trekkers are not able to accomplish it due to the wrong choice of the month and when they do, they are troubled to find lodges and tea houses.

So, successful trekkers make the right research before they plan for the Everest Base Camp Trek. Due to excellent weather conditions during September, there will be regular flights to and from Lukla airport, the gateway to the Everest region.

Mt. Everest Base Camp Trek Weather like during the month of September 2022

September is regarded as one of the finest months of the year for Everest Base Camp Trek in all aspects. It is the end of the monsoon and the beginning of the winter season here in Nepal.

Due to excellent weather conditions, the sky remains clear and blue and the visibility is also higher.

During the month of September, trails remain clean and less crowded, as this is the just beginning season of the trek and expedition in the Himalayas. You will find regular domestic flights to and from Lukla, which is the only shortest gateway to Everest Region.

Temperature is pleasant with neither too cold nor too warm, but the night temperature at the high altitude around 5000 meters and above goes to freezing temperature (sometimes). But during the day time temperature will be around 10°C-15°C.

This makes hiking during the day lighter and easier, instead of with heavily worn clothes and jackets.

As September is the month of autumn and just the beginning of trekking and expedition season in Nepal. June, July, and August are monsoon here, this is the time when the trail remains close and the tea house and lodges too.

During the monsoon season, trekkers skip any trek in Nepal, due to heavy downpours, trails are not supportive and doable.

Apart from this, visibility is low and the sky remains covered with rain clouds moreover, very few flight lands at Lukla airport, the gateway to Everest Base Camp Trek.

Now, September is the beginning season for trek and expedition, all hotels, teahouses, and lodges get open. They remain clean and less crowded and you will have the option to select your lodges and the comfortable room facing the mountain views.

Due to fewer trekkers, service at the lodge and tea house is quick and faster than during the high trekking season. There is always an abundance of selective food of your choice.

At the high altitude above 3700 meters, normally tea houses and lodges will have common sharing toilets and bathrooms in every hotel. So, during September you don’t need to wait to enjoy being in this place. 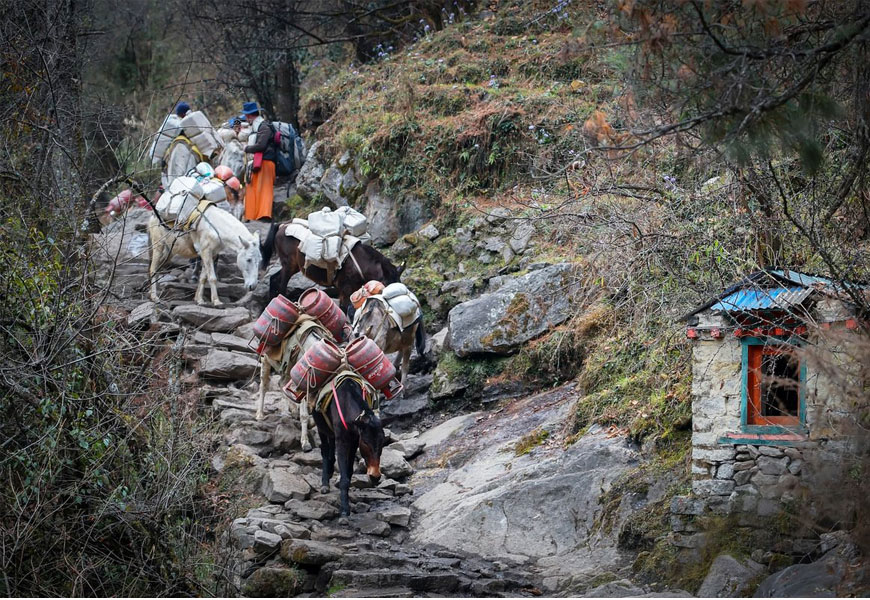 September is just the beginning time for Everest Base Camp Trek, Expedition, and High Pass Trek. This month is also the beginning of Autumn in Nepal.

This time of the year will have fewer trekkers than the month of October and November. Due to the beginning month of the trekking season, the trail will be less crowded and hotels and lodges too will have sufficient numbers of rooms.

So, you will have numerous choices of lodges and teahouses along with comfortable rooms with mountain-facing views.

Now about the cost for Everest Base Camp Trek.

Lots of trekkers think that trekking will be cheaper due to remoteness but this is not true. Everest Base Camp lies in the Everest region of Nepal and in the Himalayan region as well.

There are only two ways to enter this region and the easiest and fastest is to take a domestic flight to Lukla airport. Due to extreme freezing temperature, high altitude, and less manpower, food supplies are all carried from the city areas.

This supply is mainly fulfilled from Kathmandu and the surrounding cities and towns of the Everest region, which are supplied through flight or local transportation halfway and are carried by Mules and Yak or humans the other halfway.

These transportation charges cost higher, resulting in a hike in foodstuff and cooking equipment including vegetables, drinking water, etc.

But accommodation will be cheaper as compared to the city areas. So be prepared for the cost while trekking in the high Himalayas. As you trek higher the price hikes accordingly.

Normally, USD 50 will be enough for all your meals, accommodation, and tea/coffee, apart from the Lukla flight which will cost around USD 200, until there is a hike in air fuel.

Highlights of the Everest Trek in the month of September 2022

September is a pleasant and doable month of the year for Everest Base Camp Trek. This is the beginning of the autumn season, making the cloud remain clean with the blue sky. Visibility is higher as compared to other months of the year, this makes regular domestic flights to Lukla airport, the gateway to Everest Base Camp.

The temperature is pleasant, neither too warm nor too cold, so you can hike will less stuff and gear, and wear comfortable clothes.

There will be less crowded on the trail and lodges and tea house remains sufficient with rooms of your choice.

Apart from all these, you will be able to explore Himalayan vegetation, flora, and fauna. Snow leopard, bear, Himalayan Thar, and Himalayan birds will be the center of attraction.

During September locals will be actively involved in their daily activities. This makes the monasteries get open and ritual ceremonies organized every day.

Apart from this, you will be able to explore the unique culture and customs of the Sherpa community, their lifestyle, and their agricultural life.

Rivers of the Himalayas will be active with the snow melted water, and colorful praying flags all around the trail including the suspension bridge the best is to get an opportunity to meet and greet the expedition group and spend time with them on the trail and also at the Everest Base Camp.

Due to the finest weather, magnificent views of the Himalayas, and enjoying the sunrise view from Kalapatthar is something never to miss.

Festivals during the month of September in Nepal 2022

September is the beginning of the autumn season and the time when festivals start. Nepal is a diverse country with around 125 different ethnic communities and speaking 123 different languages.

This diversity makes Nepal a unique country in all aspects. There are numerous celebrations and festivals in Nepal, some are based on a particular community and others are celebrated nationwide.

As Nepal is not a member of a commonwealth nation, this means Nepal was never been colonized. So, Nepal till to date has its own national calendar and is stated as BS (Bikram Sambat). Now the country is in 2079 BS and this is the only official calendar of Nepal.

So, festivals in Nepal follow according to the Lunar calendar, which makes the date goes changing every year, sometimes even the month.

So, here we will talk about the festival related to the month of September 2022 AD, for this, I am taking the help of the Nepali official calendar.

In September 2022, there are different festivals and celebrations and among them, Dashain is the most popular and long celebrated festival in the entire country. This festival starts on the 26th of September and ends on the 7th of October. Making Dashain the longest festival in Nepal.

The government officially gives a week-long holiday nationwide but the Sherpa community of the Everest region follows Tibetan Buddhism. They don’t celebrate as much zeal as the other community does.

But you can be part of the celebration if you are in Kathmandu or another region apart from the Himalayas.

Other than Dashain on the 18th of September 2022, Jitiya Festival is celebrated with enthusiasm in the terai region, south of Nepal, and also in Kathmandu valley (particular location). And on the 3rd of September 2022 is constitution day which is also an official holiday.

On this day army, school, and college students perform parades and different activities, and high-level officials visit the open parade ground in Kathmandu.

Other than these popular nationwide festivals in September, there will be minor celebrations of particular communities everywhere.

Everest itself is a diverse region and is the only UNESCO natural heritage site situated at such altitude. Everest is the home of 4 mountains that are above 8000 Meters including Mt. Everest.

There are different trails and activities which you can enjoy in the Everest region. Starting from the short trek to the Everest region, you can go for high Himalayan treks, high pass treks, peak climbing, and of course expeditions.

This makes Everest a popular region where you can spend a couple of days to months hiking and trekking.

If you are planning to spend long days in Everest Base Camp, you can give a try one way to descend through Jiri instead of a short flight from Lukla or go for Gokyo Lake and Gokyo Ri with Everest Base Camp.

There are multiple popular trails in the Everest region, which fewer trekkers dare to try because those are challenging, more time-consuming but very adventurous.

The main reason for this exciting route trek in the month of September is favorable weather conditions. September is the finest month of the year for the high Himalayas trek, as the temperature is pleasant with rare snowfall and a high visibility rate.

This makes the trek a once-in-a-lifetime experience. For the best itinerary in Everest Region in September just click the link and choose according to your time frame or customize it according to your interest.