What will be the best time of the year to trek Everest Base Camp of Nepal is a very technical question. Our almost 20 years of professional experience in trekking into the Himalayas of Nepal has numerous experiences with hundreds of trekkers holding different interests. 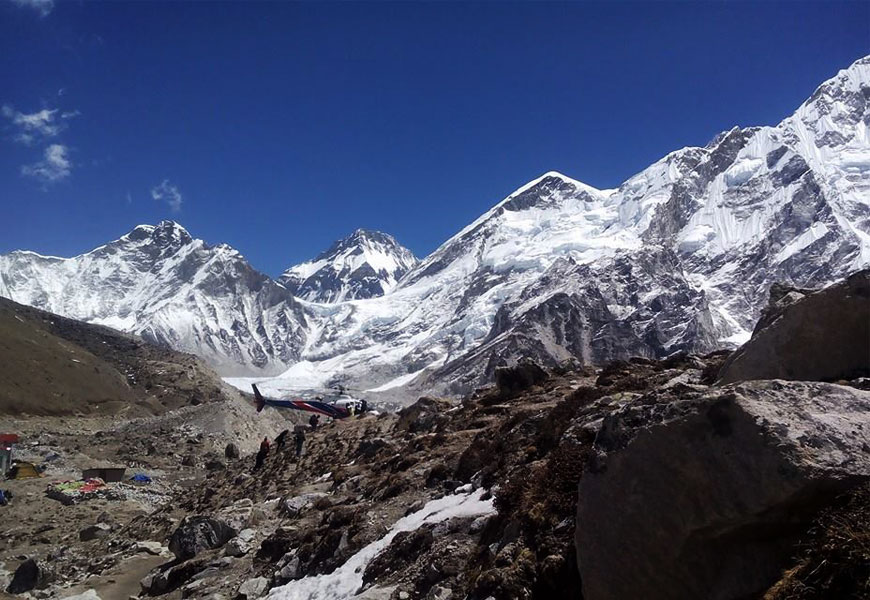 In short, the best month of the year or the best season of the year to trek Everest Base Camp Nepal totally depends upon what you want to experience apart from the Himalayas including Mt. Everest.

But this is not true, the Khumbu or also known as the Everest region of Nepal is one of the richest regions in terms of natural beauty there is no doubt about apart from the Himalayas, this region carries cultural and religious significance as well, along with diverse vegetation, flora, and fauna.

Khumbu is the only region with the highest settlement of the Sherpa community. There are multiple numbers of Gumbas, Monasteries, Chhortens, etc. and these monasteries observe numerous festivals as well, where monks perform ritual ceremonies along with mask dance.

It will be difficult for us to use words or sentences to replicate the beauty of the Himalayas of Nepal but in short, we can say, trekking to the Base Camp of Mt. Everest is once in a lifetime journey to encounter the real adventure, far from the materialistic world.

Our journey will lead us to experience how blessed we are to have such a paradise on earth. Thus, to conserve the beauty of the Khumbu region, the government of Nepal declared the trekking area into Sagarmatha National Park in 1979 AD and this was declared a UNESCO Heritage Site in the same year, which helps to preserve the vegetation, nature, culture and the age-old tradition of the people living at such high altitude. 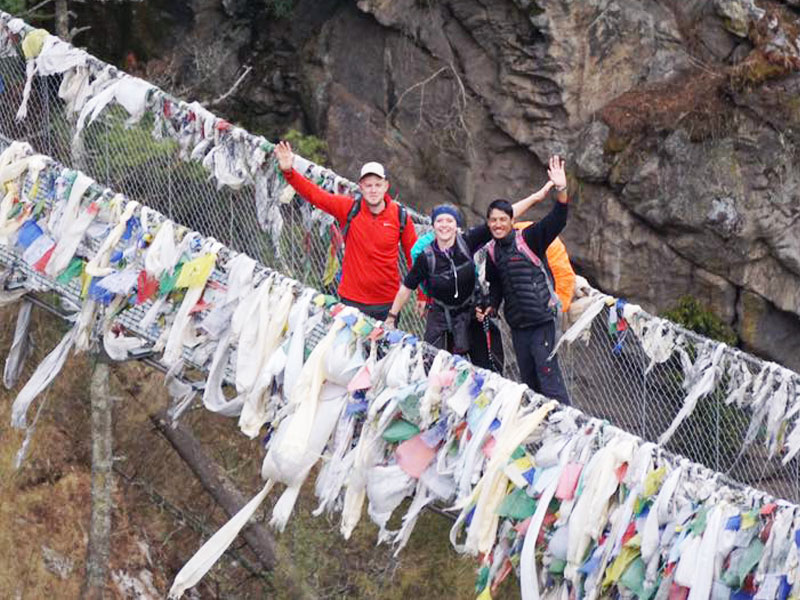 Let’s talk about the seasons in Nepal and the best seasons for trekking activities in Nepal which includes Annapurna Base Camp Trekking, Langtang Trek, Rolwaling Trek, Manasalu Trek, and also the most demanding trail the Everest Base Camp Trek. These are the different trekking trails based on the different regions of Nepal.

As to inform you, Nepal observes four different seasons throughout the year, and trekking into the Himalayas will have similar conditions, weather, precipitation, and temperature. So, through this blog, we are generalizing all the trekking trails with particular reference to Everest Base Camp.

In this blog, we (i) will discuss all the four seasons and the trekking possibilities and then we will move towards the month-based trekking time of the year. This, we believe will help trekkers choose their expectations, interest, and possible leisure time to trek into the Himalayas of Nepal.

And at the end, we will discuss what we think about the best time of the year to trek into the Himalayas of Nepal which includes the Everest Base Camp Trek. This discussion will be totally based upon our almost 20 years of trekking experience, trek difficulty, trek route, fatal damage during the seasons, etc.

What are the Seasons in Nepal?

Nepal which lies in between the two powerful countries is on the lap of the Himalayas. To the north Nepal borders the Autonomous Region of Tibet and to the South, East, and West borders India. Thus, making Nepal a landlocked country between China and India.

Weather condition which includes precipitation is mainly determined by the change through Bay-of-Bengal and the monsoon that enters India.

Nepal experiences four different seasons throughout the year. They are

Altitude, Weather, and Accessibility for Everest Base Camp Trek

As we have mentioned earlier Nepal is a landlocked country bordering India and the Autonomous Region of Tibet. This makes Nepal far away from the sea or ocean.

The highest altitude of Nepal is Mt. Everest 8848.86 meters/ 29032 feet and the lowest altitude lies in the plain Terai region of Jhapa district, a place called Kechana Kalan with an altitude of 60 meters/ 197 feet.

Weather in Nepal also depends upon where you are planning to visit, the southern Nepal temperature during summer reaches between 35-40 maximum, whereas in the Himalayas during summer it goes to a maximum of 15-20 during the day and to around 4-5 during the night.

Whereas during winter temperature in the Himalayas might be around 0 to -5 degrees during the day and during the night it can be up to -15 degrees.

And another possible, safe, easy, less time-consuming way to reach Everest Base Camp is to take a flight to Lukla from Kathmandu, this is a just30-minute flight and you can hike all the way to Monjo on the same day. This is one of the most demanding trails.

Thus, trekking into the base camp of Mt. Everest means reaching the altitude of 5364 meters/ 17598 feet which is not at all an easy hike for many without trek preparation.

Trekking into Everest Base Camp in Spring and Autumn season

The weather is in its best mood and the visibility is higher. The sky is blue with no clouds to cover the Himalayas. Further Spring season is blessed with greenery at the low altitude and as we ascend, we will see beautiful Himalayan flowers all around and rhododendron is always the best.

This time of the year offers reasonable temperature, with almost no rain and fewer possibilities of baffling snowfall. Apart from all these, these months of the year are also the time when the trail is busy with trekkers. What-so-ever may be the debate, the right season is always Spring and Autumn.

So, if you are planning your trip to Nepal, think about Spring and Autumn, start planning now to make your holiday a magical moment once in a lifetime.

Trekking into Everest Base Camp in Winter 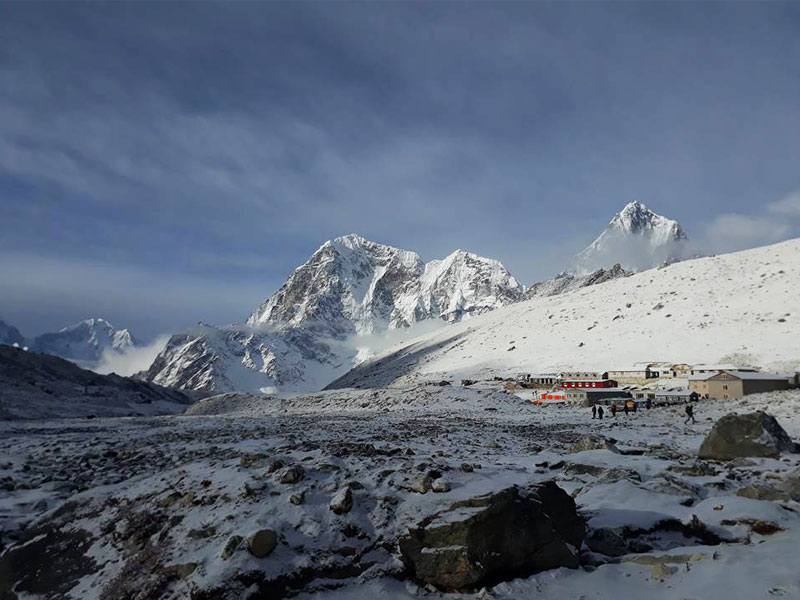 Winter falls during the month of December, January, and February, this time of the year is regarded as off-season for trekking into the high-altitude areas including Everest Base Camp but it’s not that bad to trek Everest Base Camp.

Although the temperature gets extreme cold taking us to freeze conditions if we are not well equipped with warm clothes, sleeping bags, jackets, gloves, woolen caps, etc. need to be well prepared for -15 to -20 degrees.

Along with this sometimes snowfall is also in its extreme mood, making the trail blocked or needing to wait for a day to get the weather in a better position. Trekking without a professional guide will be very risky during the month of winter, this is due to difficulty in tracing the trail when the snow-covered all around.

Now, to talk about the positive condition of trekking into Everest Base Camp during winter. This time of the month will bless you with a superb clear view of the Himalayas, with blue skies and fully snow-covered Himalayas, hills, and also the trail for trekkers who don’t prefer busy trails and sharing rooms at the lodges or tea houses. This will be the best time, as there will be fewer trekkers all the way to the Everest Base Camp Trail.

But trekking into the low altitude, which can be around 4000 meters/ 13123 feet or below will be an excellent choice with friends, family, and relatives. As the temperature will be bearable, whether will be fine with blue skies, and super Himalayan view, and less snow along the trail.

Other superb alternative popular treks in the low altitude during the month of winter can be Mardi Himal Trek, Ghorepani Poonhill Trek, Annapurna Base Camp Trek, or Namche Bazaar Trekking which Discover Altitudehas been operating.

Trekking into the Everest Base Camp during the month of Monsoon

The monsoon in Nepal mainly falls during the month of June, July, and August. This time of the year precipitation is very high and the possibility of landslides in the hilly areas and floods in the Terai region sometimes gets worse.

During the month of monsoon, rain can create trouble while trekking in the lower altitude below 3500 meters but as we trek higher the possibilities of rainfall will be very low. Trekkers will have to encounter slippy trails, muddy trails,s, and must-have raincoats sometimes leeches might bother you, and sometimes you might not be able to view the clear image of the Himalayas due to rain clouds.

This time of the year receives a sufficient amount of rainfall, which led to fog or smog which might create low visibility resulting in the cancellation of domestic flights including flights to Lukla, which is the only Arial way to land at Lukla airport for the Everest Base Camp Trek or other treks related to Khumbu/Everest Region.

So, if you don’t want to trek during the monsoon Helicopter Tour to Everest Base Camp might be a possible alternative, and other city tours in Kathmandu, Pokhara, Lumbini or Annapurna, or Langtang Trek can be the best alternative.

Best Months of the year to do Everest Base Camp Trek

When we say the best month of the year to trek Everest Base Camp Trek, it also includes other trekking and hiking trails of Nepal which can be the high-altitude trek or low-altitude trek. This best month of the year is the same as all the adventure activities in Nepal ranging from peak climbing, three pass trek, base camp trek, short trek, day hike, city tour, and jungle safari.

Normally, we believe Nepal is all-season which means you can do activities in Nepal every month of the year. What-so-ever we believe, for the best of best, if you are planning to trek for the Everest Base Camp Trekking. We strongly recommended the month of March, April, May, September, October, and November.

These six months of the year includes Spring and Autumn season, during this month the precipitation rate is very low or almost no, the skies will be blue in color, the temperature is at its finest, weather is not too hot in lower altitude and neither freezing in the Himalayas and snow-fall might happen but in a moderate rate sometime.

Apart from all these the visibility rate is higher, which means we will be able to enjoy magnificent views of the Himalayas. And there will be greenery everywhere (lower-altitude), with superb newly bloomed flowers including rhododendron (national flower), along with other Himalayan flowers of the high-altitude, medicinal herbs, flora and fauna, and diverse vegetation. 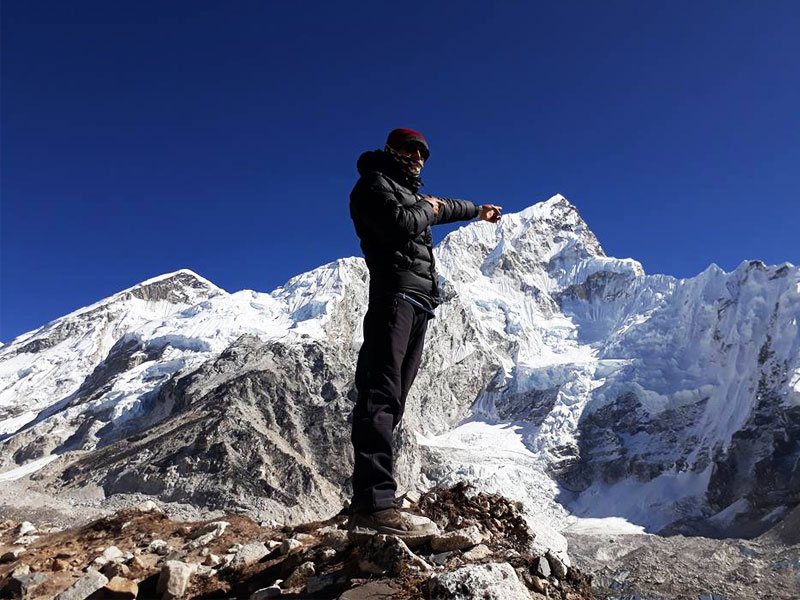 This month of the year is also for reaping and sowing of crops, so trekkers will be able to experience the rural lifestyle of Nepali culture, where still 70% of the population live as a farmer.

Discover Altitude strongly recommended trekkers plan their trip to Nepal during the Autumn and Spring season (March, April, May, September, October, and November) if you are planning some activities in the Himalayas of Nepal.