There is no doubt about the popularity of Everest Base Camp Trek which has always been rated among the top ten destinations for trekkers around the globe. Now, the question is why travelers prefer to hike all the way to Everest despite its difficulty. A very simple answer will be due to its diversity of nature and culture.

The entire region of Everest also known as the Sagarmatha region is one of the UNESCO heritages situated at the highest altitude. This region also is the highest settlement area of the world mainly inhabited by the Sherpas.

Without entering further into the unrelated topic which I have included in my other blog. Let’s talk about the distance for the Everest Base Camp Trek.

Trekking all the way to Everest Base Camp is a strenuous climb uphill but is accessible to accomplish the target if some minor requirements are fulfilled (this is mainly recommended for those trekkers who are first at such an altitude and are layman related to Himalayan treks).

Now dragging myself towards my intention of this blog. To speak there are two different trails to follow all the way to Everest Base Camp. Among them, one is the oldest route which was followed by the first expedition team of Sir Edmund Hillary in 1953 and is also the longest route to Everest Base Camp.

Let’s talk about both the Everest Base Camp Trekking Route separately and how it goes, along with all the detailed information:

Now let’s deal separately with the distance, altitude, and the route of both the trail taking us to the same point of Everest Base Camp.

Trek to Everest Base Camp Via Lukla

Trekking to Everest Base Camp through Lukla is the shortest way to the highest base camp on earth. Here you can enjoy a short scenic flight from Kathmandu airport to Lukla airport which is just around a 30-minute flight and can hike all the way to Phakding on the very same day.

This will reduce your 7 days via Jiri which is just a one-way hike uphill. On the other hand, you can spend two extra nights for acclimatization while ascending the Everest Base Camp. This makes the trek shorter, easier, less time-consuming, and also budget and affordable.

Further, descending downhill you can take a short flight back to Kathmandu airport through Lukla airport. This two-way hike to EBC is just130 km (80 miles), which is to be completed in 9 days with 2 additional days for acclimatizations. Thus, making the entire trip an 11 days hike from Lukla to Lukla.

But an extra day is required to take a flight back to Kathmandu airport early in the morning. Let’s see how the Itinerary for the Everest Trek Via Lukla goes: 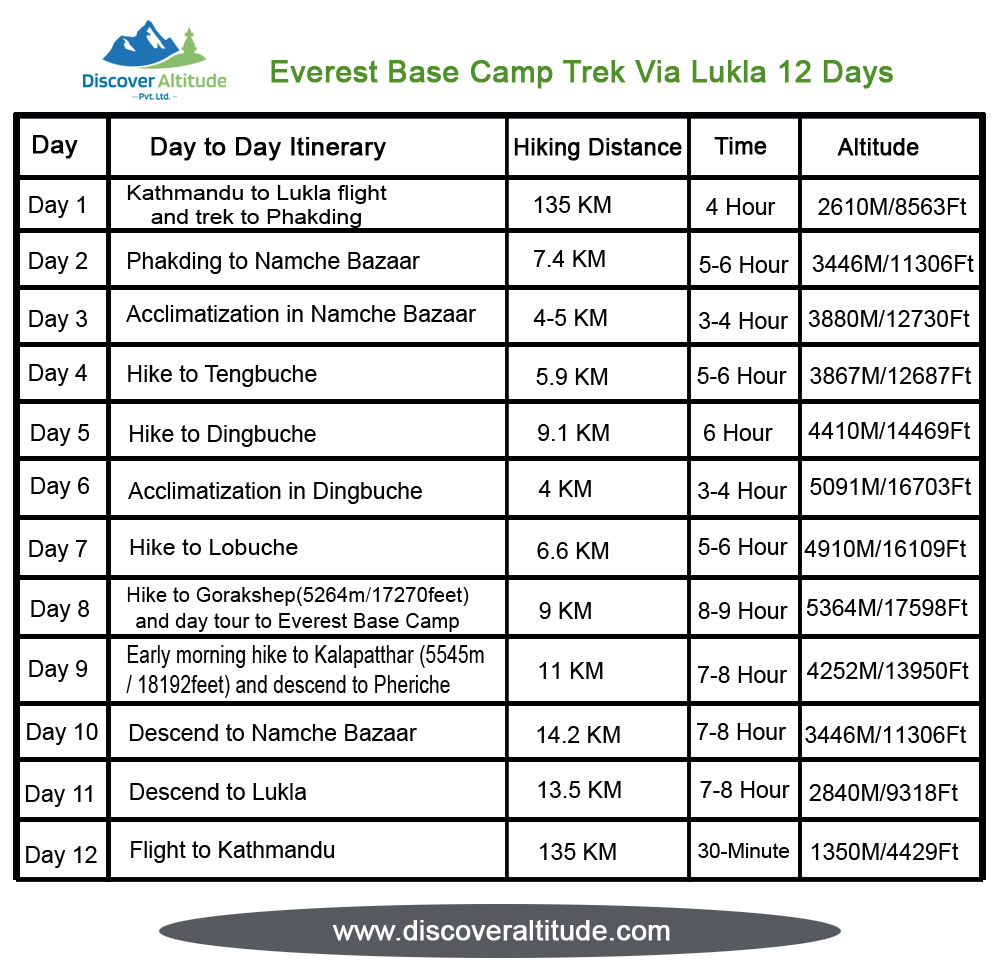 Trek to Everest Base Camp Via Jiri 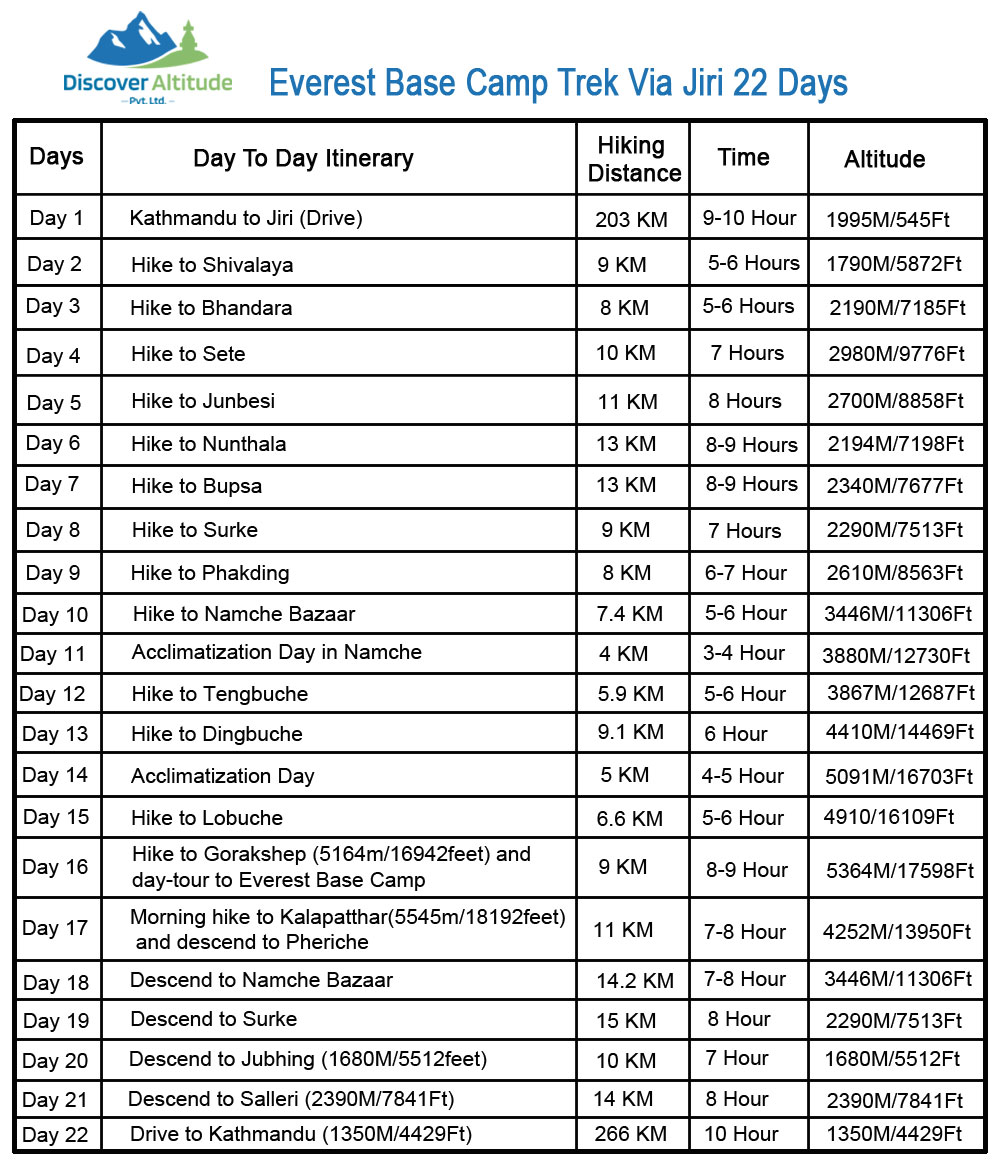 This trail to Everest Base Camp is one of the first but longest trails to Everest. The popularity of the Jiri trail was highlighted in 1953 when Sir Edmund Hillary and Tenzing Norgay Sherpa first summited to the top.

This dual accomplishment led the world to recognize Mt. Everest as the highest mountain and can be submitted, also brought a glimpse of the possibility for others to keep a record.

As I have already mentioned Everest Base Camp trek from Jiri is the longest route but is shorter than the first climbers used to hike all to the summit point. This is so because now trekkers can drive all the way to Jiri from Kathmandu which was not possible some decades ago.

Although it is shorter than used to be but still it is longer than the other short trail to Everest. If you are planning to trek from Jiri to Everest Base Camp and descend to Kathmandu without a flight option, then the entire trip from Jiri to Kathmandu will be of 22-25 days depending upon the route you follow. 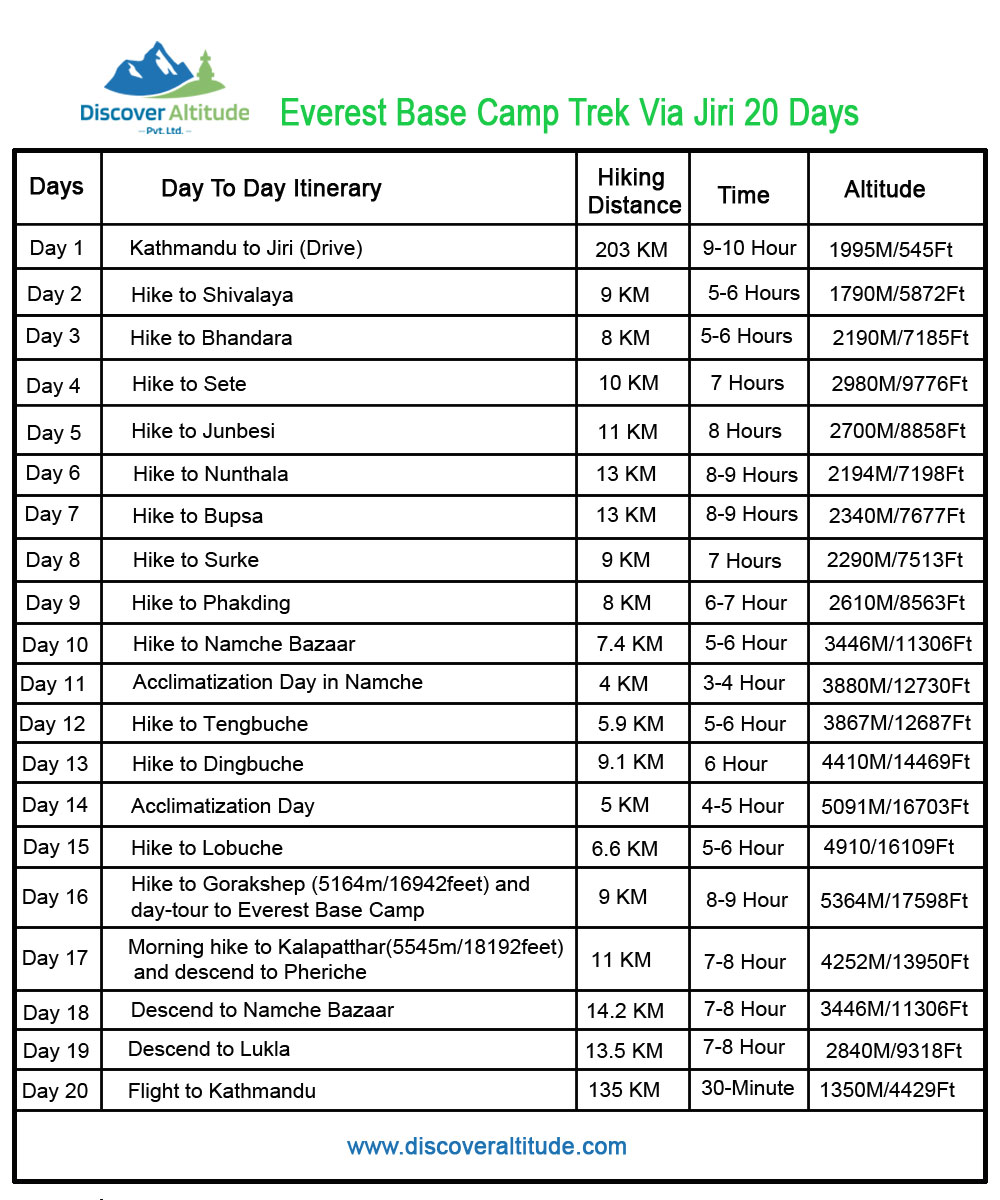 Still, you are desperate to trek Everest Base Camp Via Jiri which is the oldest route as well but worried about arranging a long vacation. Relax I will help you with how to make this route shorter. This Everest Base Camp Trek Via Jiri can be customized into a 20-Days trek from Kathmandu to Kathmandu. For this, we need to thank Lukla airport. Let’s see how this Itinerary goes: 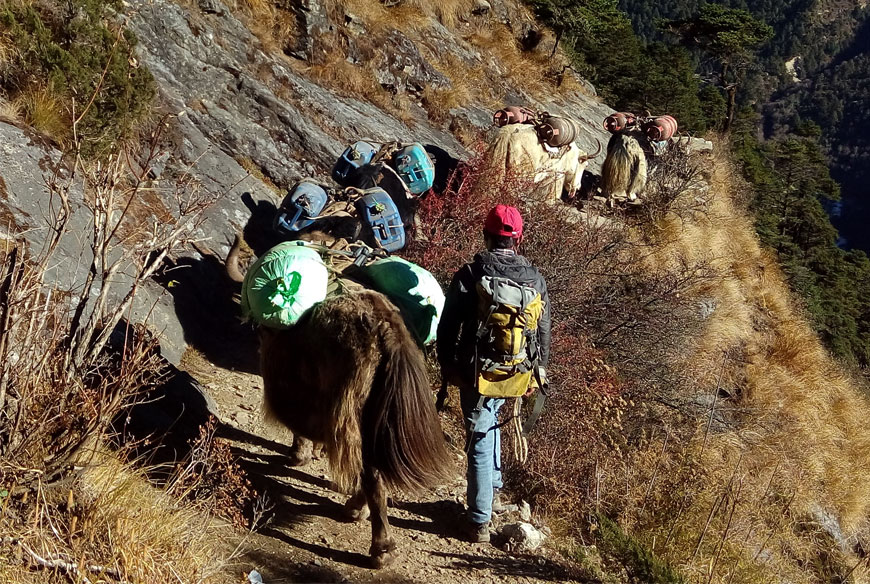 If you want to make the Everest Hillary Trail shorter then the best possible option will be to take a one-way flight to Kathmandu from Lukla. This will help you to experience the varied culture of the lowland Everest region through Hillary Trail.

Despite its difficulty, the Everest Base Camp trail is gaining popularity all around the world. This is also because now you can customize the trail to just a 12-days hike from Kathmandu to Everest Base Camp and all the way back to Kathmandu.

Everest Base Camp trek can be shortened when you take a domestic flight to Lukla airport from Kathmandu. This minimizes the 135km distance in just 30-minute and when we do the same while descending it minimizes our 135km more in just the same 30-minute, which means in just an hour we will be able to cover 270km.

Upon landing at the Lukla airport our real adventure to Everest begins all the way through the low alpine into the high Himalayas taking us to the highest altitude of 5545 meters at Kalapatthar and 5364 meters at the base camp of Mt. Everest.

Hiking through Lukla will deduce your required number of days for the trek along with the cost. This route is popular and also affordable for any trekkers, making one accomplish their dream of being at the base of the highest mountain on earth.

On the other hand, if you follow the old route to Everest Base Camp which is through Jiri or Salleri. This will take not less than 22-25 days to complete the trial, avoiding the flight (both ways). As the number of days increases the cost for the trip also does and driving all the way to Jiri or Salleri is also not an easy drive, it takes around 10-11 hours to reach the starting point of the trek off-road.

Now, to share my experience without any doubt I will recommend Everest Base Camp Trek Via Lukla which is affordable, and less time-consuming with scenic flights of the Himalayas.