Popular Base Camp Trek in the Himalayas of Nepal...

Base Camp Trek in Nepal is a unique and first-of-its-kind blog to segregate the popular base camp in the Himalayas of Nepal. Our list includes only those base camp treks where trekkers' accessibility is reachable in a short span of time and also where trekkers can trek on a limited budget.

This is to make it easy going for trekkers and also to make sure they have a sufficient amount of tea houses and lodges to stay in while trekking.

Thus, we are not going to mention the expensive base camp trek where trekkers need to camp, as in those base camps there is a limited number of lodges and tea houses in lower altitudes and as we ascend, we have to stay overnight in camp/tent. This makes the trek expensive, as all the cooking items have to be carried by porters.

Here are the top five lists of Base Camp Trek in the Himalayas of Nepal. This list has been chronologically selected on the basis of its popularity, the number of trekkers, and also altitude. Let’s see how it goes and why trekkers prefer them the popular base camp trek. 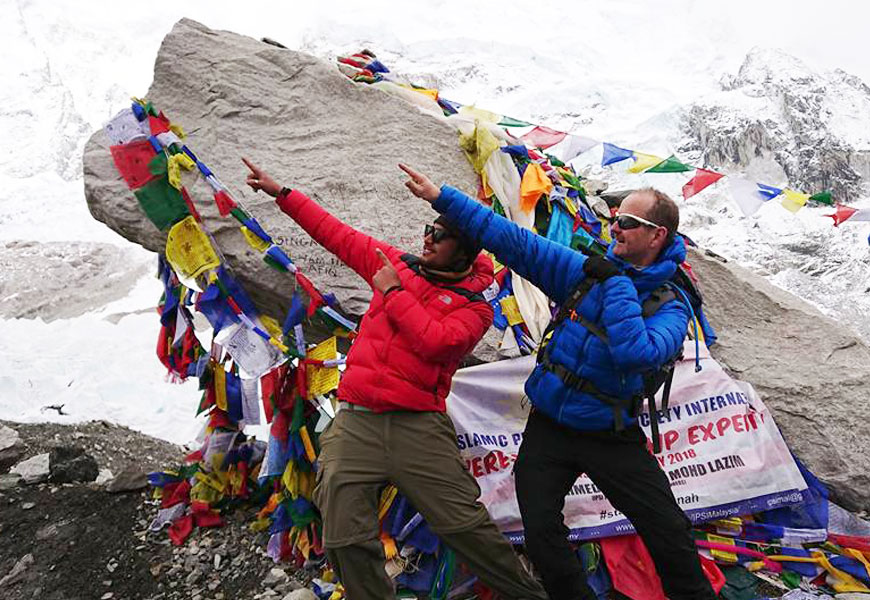 Everest Trek is not just a hike, it is a journey to the existing paradise on earth. Starting with the stunning flight to Lukla airport (2824 meters/ 9318 feet), you will hike all the way through the pine and rhododendron forest, passing by the snow-melted river, crossing a suspension bridge, visiting different monasteries, gambas, Chorten, etc.

Entering the only existing highest altitude UNESCO Heritage Site of Sagarmatha National Park, you will be able to observeand  the diversity of flora and fauna on this trail.

Trekkers can visit two different spots on a day tour which are Everest Base Camp and Kalapatthar for the mesmerizing view of Mt. Everest, Ama Dablam, Lhotse, Thamserku, and many more in a wide range.

Apart from the Himalayas, Everest Base Camp Trail is rich with the Sherpa culture, customs,s, and religion. This is the only Khumbu region where the highest settlement does exist.

And if you are during the month of Autumn and spring you will be able to observe the different festivals of the Sherpa community, which are mainly celebrated in the monasteries which also include the 16th century the biggest Tengboche monastery.

With beautiful flowers blooming all around at the lower altitude, you can explore the Himalayan flowers at a high altitude.

While trekking to the Everest Base Camp, you better prefer to be during the month of March, April, May, September, October, and November. This is the Best Time of the Year to Trek Everest Base Camp for mesmerizing view with a clear blue sky and high visibility rate. 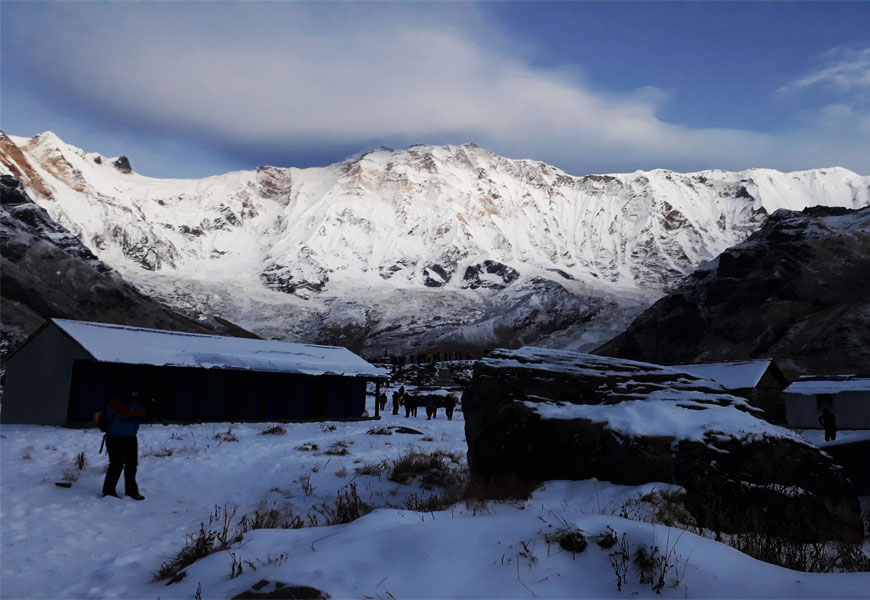 This is a moderate trek starting from Pokhara which is also the gateway to the Annapurna region.

The ethnically diverse region with culture and vegetation, the Annapurna base camp trek provides a picturesque view of the Himalayas of Annapurna and the Dhaulagiri region. Trekkers will be able to perceive the eternal Annapurna, Dhaulagiri, Nilgiri, Gangapurna, Mardi Himal, Machapuchheri, etc. 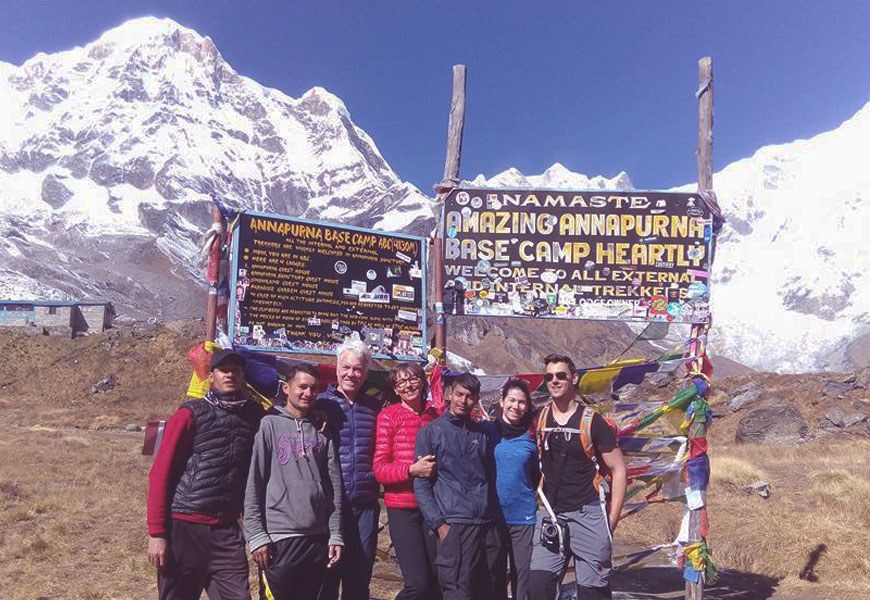 Annapurna is the only region rich with the diverse trails taking one to different routes within the region and also can be connected to other regions as well, which can be the Manaslu region and Dhaulagiri region.

Along with the Himalayas, the region is blessed with different ethnic communities, cultures, customs,s, and religions. You will be able to enjoy the rural lifestyle, village, waterfall, rivers, mountains, and terrains along with a natural hot spring bath on this trail. 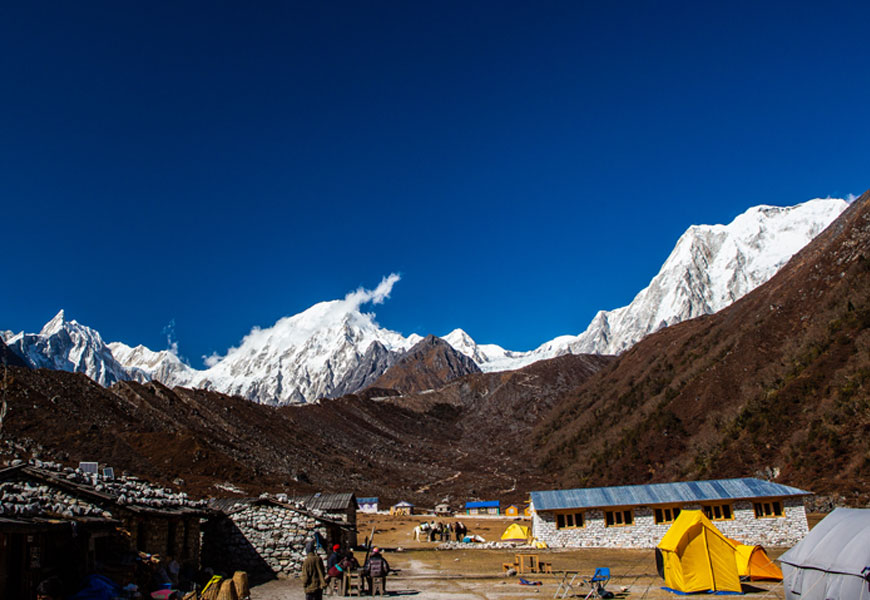 Manaslu Base Camp is a popular off-the-beaten trail and a restricted area for any individual foreign trekkers taking one to the base of the 8th tallest mountain Mt. Manaslu, also known as the ‘Killer Mountain’ by the climbers due to its difficulty level to climb and high fatality rate.

Until 1991 AD foreigners were restricted to enter the higher region of the Manaslu but now trekkers can trek with special trekking permits which can be obtained from Nepal Tourism Board.

There is a strict provision for obtaining a special permit to enter Manaslu Circuit Trek, solo trekkers are not granted permits, and a minimum of 2 trekkers are required to obtain permits.

This can be obtained only through the local government registered trekking agency of Nepal and a trekking guide is a must to have for Manaslu Trek.

Manaslu trek is regarded as one of the most scenic and exotic trails in Nepal, where still only a few trekkers choose this adventurous trail due to its wilderness and remote region.

And the settlement of local people is very less as compared to other trekking trails in Nepal. This makes Manaslu a challenging and adventurous trail to trek.

Bordering Tibet to the north, the Manaslu region lies in the Gorkha district of Nepal. Despite its recent popularity due to its diversification and beauty, Manaslu has always been a top choice for trekkers who prefer wilderness trails and crowd-less trekkers.

Trekkers will find tea houses and lodges for their overnight stay, so nothing to worry about with camping and carrying foodstuff. The trek takes you to the world’s eighth highest mountain Mt. Manaslu (8163 meters/ 26781 feet).

Hiking all the way to explore the Manaslu Base Camp and passing the Larke La Pass (5123 meters/ 16808 feet), you can explore the Tibetan Buddhist culture, and visit decade-old monasteries, gumba, Chorten, etc. 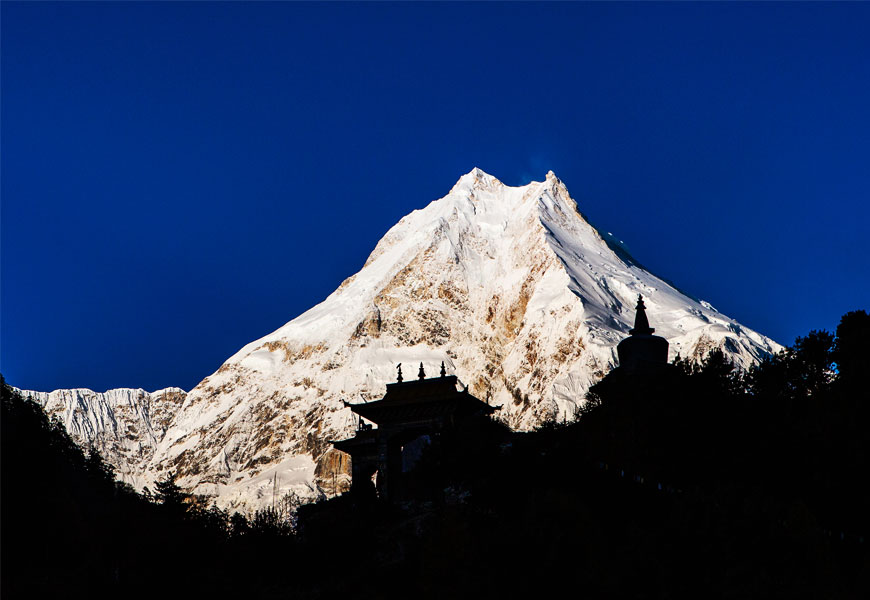 To sum up, the Manaslu trail is diverse with nature and culture with the majestic view of Manaslu, Annapurna, and numerous other high mountains below 8000 meters, and one can further divert their trail to the Annapurna region by crossing the highest pass on the earth Thorong La Pass (5416 meter/ 17769 feet).

So, if you are thinking of some adventure why not give a try to Manaslu Circuit trek and end up through the highest pass to descend at Jomsom or Beni or Nayapul, or if you have a limited time frame go for Short Manaslu Trek 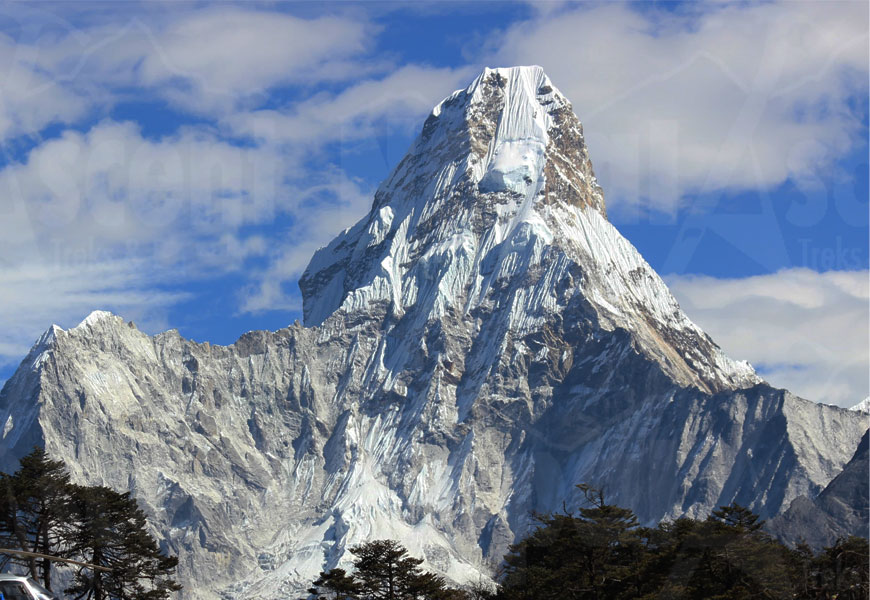 Ama Dablam Base Camp Trek is the fourth most popular trekking destination leading one the base of Mt. Ama Dablam (4600 meters/ 15092feet). Ama Dablam lies in the Everest region of Nepal and the trail is too same as the Everest Base Camp till Tengboche.

Mt. Ama Dablam is one of the most attractive mountains in the entire Khumbu region, with its magical view trekkers will be wanting more to explore. Spreading its arm, Ama Dablam looks like a mother welcoming her children.

This majestic journey to Ama Dablam Base Camp is a short trek at a moderate altitude into the Everest region.

Trekkers will be able to explore the diversification of the entire region, the cultural life of the Sherpa community, the flora, and fauna of the Khumbu region, visit different monasteries, gumba, Chorten, and also, the capital of the Khumbu region which is Namche Bazaar.

Trek start with a short flight to Lukla to hike Phakding for the first overnight camp in a lodge. The very next day you will be entering the Sagarmatha National Park, which is also the only UNESCO Heritage Site at such a high altitude.

Entering the National Park will take you to Namche Bazaar, the most demanding town in the Khumbu region with bars, restaurants, snooker houses, hospitals, banks, and classical hotels to stay in.

Trekkers will have a sufficient amount of time to hike Everest view hotel for the 360°panoramic view of the Khumbu Himalayan range including Mt. Everest.

Leading one to Tengboche, you can visit the 16th-century Tengboche monastery before reaching Tengboche.

Spending a night in Tengboche will be a day tour to explore the base of the Ama Dablam mountain. This majestic Himalaya is unique in itself and also the most viewed Himalaya in the entire Everest trekking trail.

Fewer trekkers visit the Ama Dablam Base Camp, which makes the trail crowd-less as compared to Everest Base Camp.

Due to its low elevation, Ama Dablam can be an easy and moderate hike for any age group followed by the majestic view of Mt. Everest. 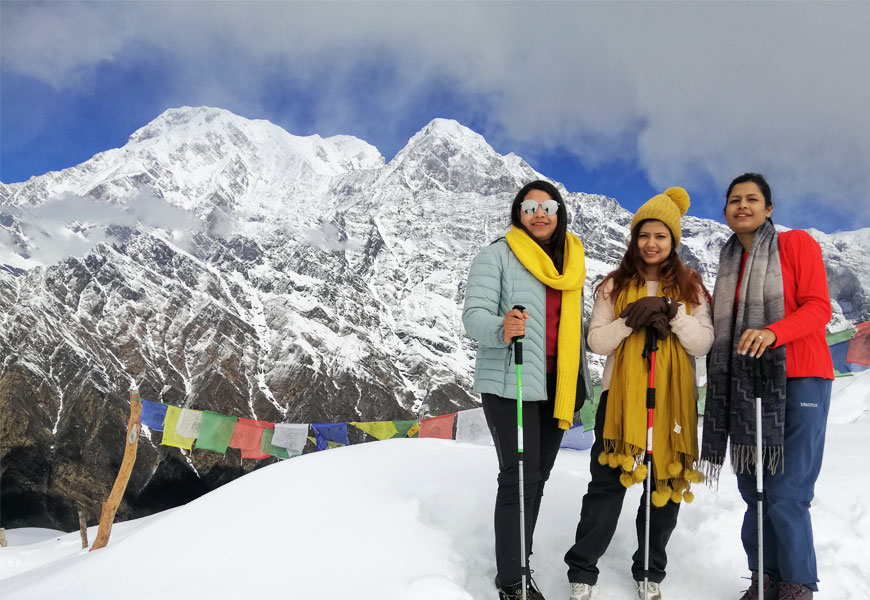 Mardi Himal Base Camp Trek is an isolated trail, leading you to an off-the-beaten-track into the Annapurna region of Nepal. This is a very newly-operated trail into the base of Mardi Himal (5587 meters/ 18330 feet).

The trail to Mardi Himal Base Camp offers varied diversity. Starting from the lowland to the Himalayas, you can experience the rural lifestyle, culture, and religion of local ethnical dwellers.

With less crowd on the trail, you can enjoy the solitude of nature, as the area is rich with flora and fauna. Due to its newness in the trial, there are limited numbers of tea houses and lodges which provide accommodation and food.

With a well-maintained trail, you can enjoy this Mardi Himal Base Camp trek with your friends and family members, as the trek is easy going to the highest altitude of 3580 meters/11745feet which will be High Camp. 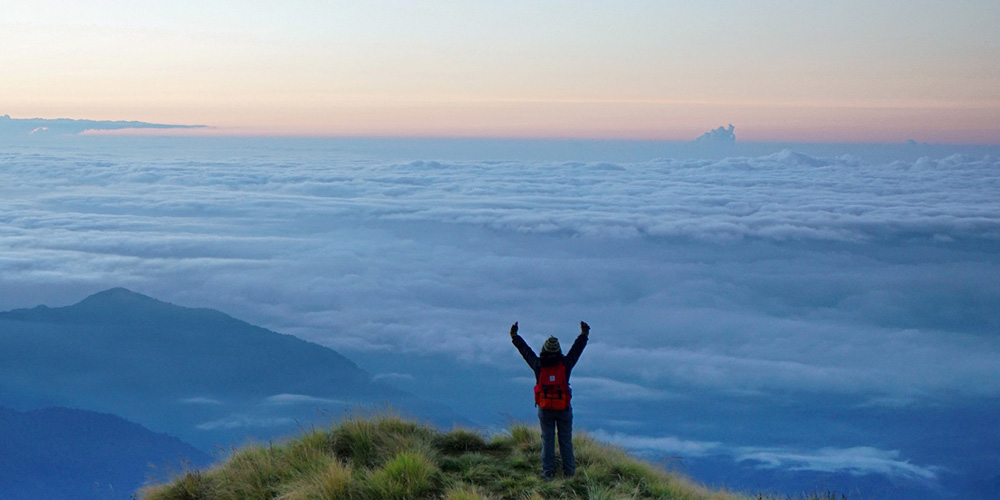 From High Camp, you will take an early morning hike to the base camp of Mardi Himal (4500meter/14764feet) to explore the surrounding Himalayas including Annapurna (8091meter/26546feet), Machhapuchre, Hiuchuli, Gangapurna, Mardi Himal, and many more,

This will be a perfect spot to explore the sunrise view over the mighty Himalayas. So, what to think, plan your trip to easy-going Mardi Himal Base Camp Trek-6 Day with your near and dear ones.